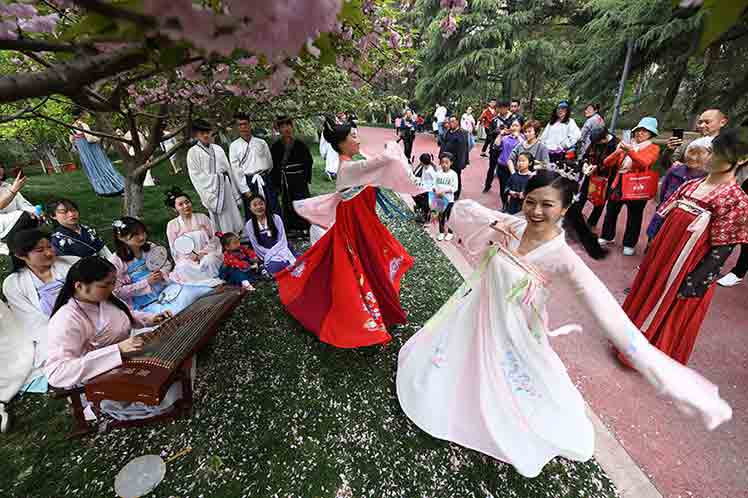 This process is visible in China thanks to the boom in the use of hanfu, a typical garment of more than three millennia that has returned with force and is now very common to see each day in streets, parks, universities, recreational clubs or festivals dedicated precisely to enhance its value.

It is a traditional garment of the Han ethnic group, the majority in the country. It is said to have been worn by the legendary Yellow Emperor and since its creation it has been associated with the consolidated social elite and silk.

It can be worn by both men and women and consists of several layers of loose clothing that are wrapped around the body, with sleeves down to the knees and is complemented by headgear and a belt.

The hanfu had a strong influence on the development of traditional clothing in nearby countries, as in the case of the kimono in Japan, the hanbok in Korea and the áo tú thân in Vietnam.

More than a decade ago, a movement broke out in the Asian giant that promotes the revival of the attire among young people, especially through social networks.

According to studies disclosed on the popular platform WeChat, in 2018 there were two million followers of that trend and many were even interested in learning habits such as the tea ceremony and playing ancient musical instruments of the country.

The success on TV of series set in ancient times also contributed to the rise of the garment and even a recent historical novel racked up 400 million views in three days of broadcasting.

Meanwhile, a survey by the China Daily newspaper revealed that 65 percent of those interviewed confessed that they like the millenary piece and 44 percent said they had worn it at some point.

For 59 percent, the return of hanfu helps to rescue traditions, 66 percent appreciated it as a sign of openness and inclusion in society and 55 percent considered it a tool that diversifies aesthetic values.

Meanwhile, experts summarized that the fact is a sign that Chinese youth accept their roots and recognize a rich cultural legacy left by several generations of ancestors.