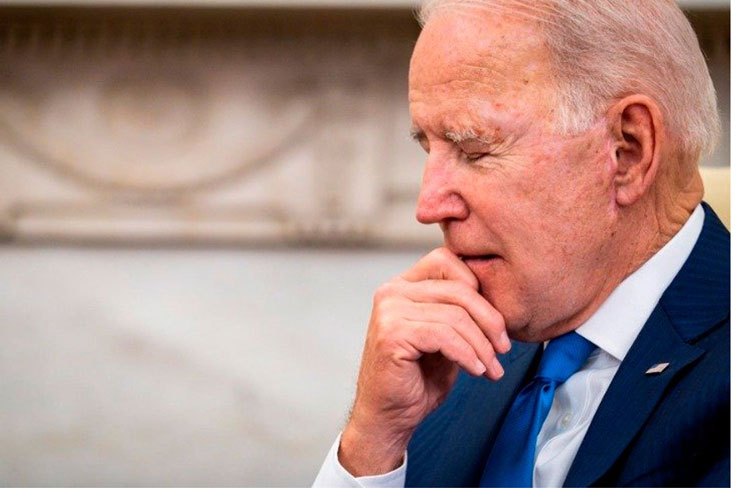 Delving deeper into the results, the news is even worse for the current White House team, the USAToday and Suffolk University poll noted.

According to the data, only 32 percent of independent voters approve of the job the 46th President is doing. Those ones decide elections in battlefield states like Wisconsin, Michigan, Georgia, Pennsylvania and Arizona.

If Biden is abandoned by the important voting segment, Democrats will lose those states regardless of who the Republicans nominate in 2024, the survey uncovered.

The president, who continues receiving criticism for his management of withdrawing from Afghanistan, faces a more complicated scenario with the double terrorist attack on Thursday near the Kabul airport that left some 90 deaths, including 13 Pentagon soldiers, the attack there with the most casualties for US troops since 2011.

However, public sentiment against Biden goes far beyond Afghanistan, as a recent NBC poll detected that the biggest concerns relate to Covid-19, whose rebound from the aggressive delta variant of the SARS-CoV-2 coronavirus SARS-CoV-2 imposed red numbers once again.

‘His approval on immigration and the economy are also upside down. The only thing keeping him in the game is his management of the Covid-19 pandemic, where he barely reaches 50 percent,’ David Paleologos, director of the Suffolk Policy Research Center highlighted.

The numbers on the economy are staggeringly low in that USA Today/Suffolk poll, in which Biden received 39 percent support on the issue that usually decides elections.

In addition to that, on July, The Washington Post-ABC News poll showed the president with 38 percent approval on his handling of crime, and 33 percent on immigration due to the crisis at the US southern border, and it is hard to see where and how Biden and the Democratic Party can turn his situation around, The Hill commented.