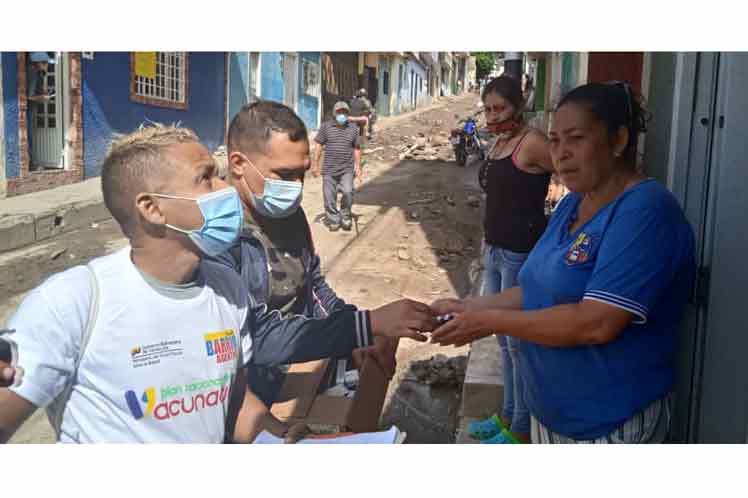 The twentieth brigade from Ernesto Guevara Contingent, made up of 18 Cuban collaborators -doctors, nursing staff and logistics assurance personnel- traveled from Caracas to one of the federal entities most affected by the intense rainfall in recent days, to offer their services immediately.

With a population of approximately 37 thousand inhabitants, eight sectors belonging to four parishes (demarcations) of the Tovar municipality were severely punished by floods and landslides.

Speaking to Prensa Latina, Dr. Amado Peña, head of the Cuban emergency brigade deployed in the disaster area, explained that collaborators concentrate their work on the most affected communities, by searching house to house for the main health problems, traumas, physical and psychological.

The General Practitioner, from Isla de la Juventud (Cuban municipality), added that the team offers its support in the vaccination against Covid-19 in the spaces established by the authorities for the mass immunization of the population.

Cuban collaborators receive daily numerous displays of gratitude from the population in the municipality located in the Andean region of Venezuela, who suffered the consequences of the torrent of mud, stones and debris causing damage to hundreds of homes.

‘We are identified with distinctive outfits, and when they recognize us, we perceive in them hope for our unconditional support and trust in the Cuban medical mission’, the doctor emphasized.

Other teams made up of Cuban collaborators in the South American nation integrated brigades from Ernesto Guevara Contingent during the Covid-19 pandemic to assist in the most complex scenarios, after the call of the Bolivarian Government to reinforce the sanitary shield and stop the spread of the disease.

According to official sources, a total of 88 municipalities in Venezuela have been affected so far by a rainy season with total rainfall 65 percent higher than the records of previous years.

The Government of Venezuela issued a 90-day emergency decree last week for the states of Apure, Bolívar, Yaracuy, Zulia and Mérida to address the effects of heavy rains.