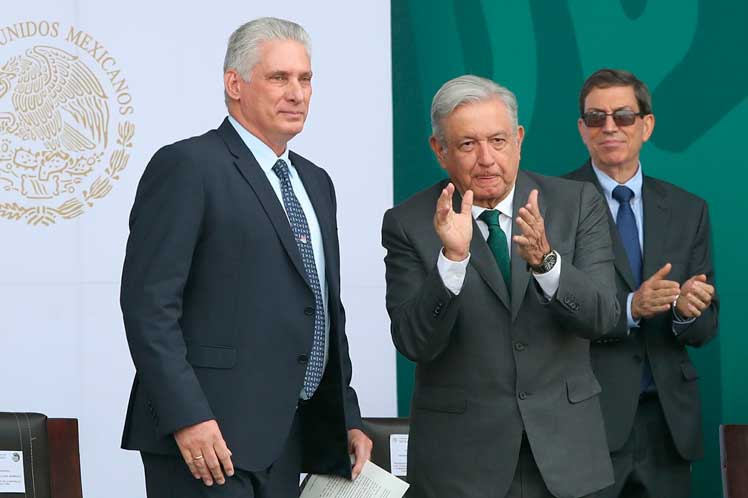 The newspaper notes that, in his speech for the 211 anniversary of the beginning of the Revolution of Independence, President López Obrador called on his US counterpart, Joe Biden, to lift the blockade against Cuba and seek a reconciliation that ‘will put an end forever to the policy of attacks’ towards the island.

It describes that, accompanied by his Cuban counterpart, the president recalled that no state has the right to subdue another country and evoked words of George Washington meaning that nations should not take advantage of the misfortune of other peoples.

Likewise, he considered that ‘it looks bad’ to maintain this ‘perverse strategy’ of precipitating a regime change through economic suffocation, because, even if it were to succed, ‘it would become a vile, pyrrhic, rogue triumph; it would be a stain of a kind that can not be erased even with all the water in the oceans’.

It should be remembered, the editorial notes, that López Obrador’s words not only represent his personal feelings or an isolated position of the Mexican government, but also reflect the position of the international community, reflected in the 29 occasions in which the UN General Assembly has overwhelmingly condemned the embargo imposed 59 years ago.

The topicality of this claim, it adds, is reflected in the fact that just three months ago the resolution urging Washington to end this illegal and unilateral measure was approved with 184 votes in favor, two against, those of the United States and Israel; and three abstentions, Ukraine, United Arab Emirates and Colombia.

In addition to being the result of a global consensus, it should be noted that the expressions of the federal Executive are not issued from a position of hostility, since the spirit of collaboration and dialogue that characterizes the attitude of the Mexican government towards its US counterpart is beyond any doubt.

In the context of a respectful and mutually beneficial relationship, the Mexican president appeals to the feelings of a head of state who, in this matter, is at fault with international law, with human rights and ethical principles, but also with the very political current that it represents.

It cannot be forgotten, the article recalls, that former President Barack Obama, in whose administration Biden served as vice president, led a historic turn by moderating Washington’s aggressiveness against the island, in a normalization process that was intended to be irreversible.

It is clear, then, that the position of the Mexican government is not one of confrontation, but rather of seeking solutions to a long-lasting conflict for the sake of Cuba, but also of the United States.

As it became clear during the brief detente, the blockade is immoral, criminal and, to top it off, counterproductive to the freedom to do business of many US entrepreneurs.

For this reason, it should be noted that Obrador’ s speech appeals also to the Cuban-American community, from which the most important networks of interests and ideological inertias preventing the path of conciliation originate.

It is hoped that the White House understands this call as a legitimate attempt to overcome an unsustainable situation and reopen the ways for a necessarily positive understanding for all parties involved, La Jornada’ s editorial concluded.