Italy recognizes work of organization in solidarity with Cuba 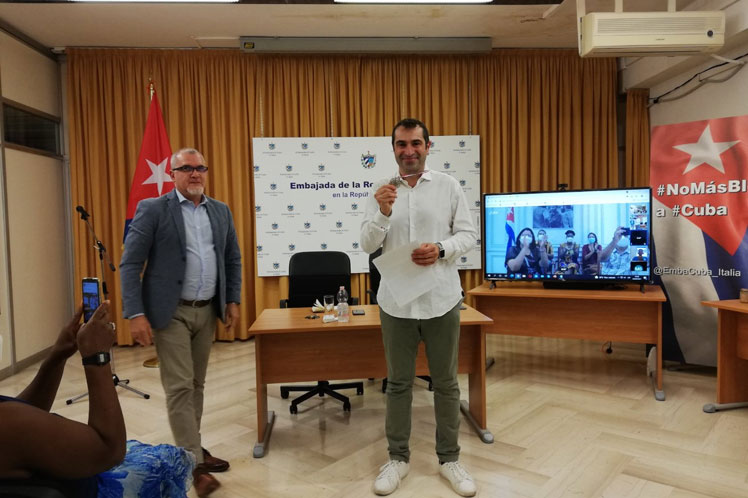 Italy recognizes work of organization in solidarity with Cuba

Cuban Ambassador to Italy Jose Carlos Rodriguez presented the award to the president of the organization, Michele Curto, in an emotional meeting held at the headquarters of the diplomatic mission, where representatives of different organizations and institutions participated.

Also present on line from Havana were officials and leaders of the Cuban Institute of Friendship with the Peoples (ICAP), led by its first vice president, Noemi Rabazza.

Founded in 2015 in the city of Turin, the AICEC is acknowledged for its outstanding work of solidarity with Cuba and the promotion of new spaces of collaboration conducive to its development.

It is impossible to talk about the organization without recalling its role in the creation of the Gino Done brigade.

Its members developed an outstanding work in sociocultural projects in several Cuban cities, including Havana, during the celebrations on its 500th anniversary.

Along with other organizations of the movement of solidarity with Cuba, the AICEC participated in numerous activities such as the tribute to the historic leader of the Revolution, Fidel Castro, by designating an elevation of Mount Arpone with his name carved on a piece of caguairan timber.

The AICEC also played a key role in the arrival in Turin of the brigade of Cuban healthcare collaborators from the Henry Reeve Contingent, whose work was supported and recognized in many ways and scenarios.

Dedication and creativity characterize the activities of the organization that created the national network ‘Sano, Justo y Solidario’ (Healthy, Fair and Helpful), specialized in the commercial distribution of Cuban agricultural food products.

More recently, it was the main promoter and coordinator of ‘Poniendole Corazon a Cuba’ (Putting your Heart into Cuba) initiative for the transfer to the country of a donation of over 200 cubic meters of medical equipment and material to fight the Covid-19 pandemic.

Other groups in solidarity with Cuba, as well as institutions from different fields and profiles collaborated with the cargo valued at about 1.5 million euros.

Among them, the National Coordination of Cubans Resident in Italy, the Italian General Confederation of Labor and the San Egidio Community, represented in the flight of the Neos airline, and in the AICEC award meeting, by Ada Galano, Sergio Bassoli and Paola Cortelassa, respectively.

The event was also attended by other members of the delegation that traveled to Havana with the aid, such as Maria Giovanna Tamburello, who did so on behalf of several groups participating in the initiative; Enrico Saccarelli, from AsiCubaUmbria; and Umberto Cerutti, from the AICEC.