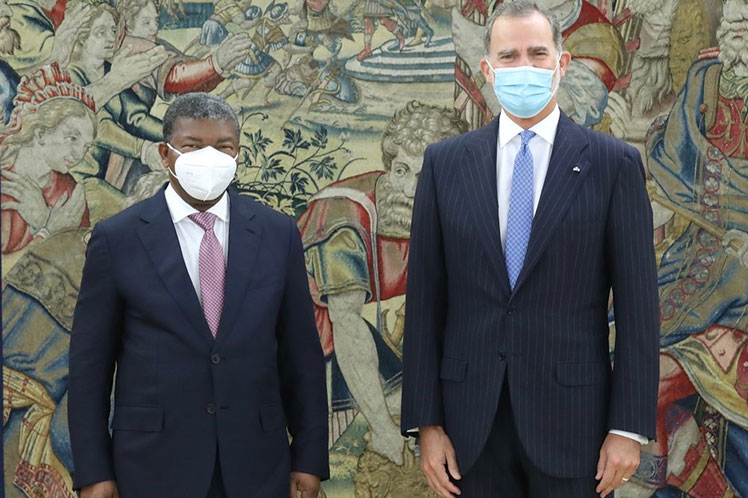 On his first official meeting shortly after arriving in Madrid, Lourenço received assurances from the King of Spain’s support for Angola’s desire to diversify its economy.

Accompanied by Queen Letizia, as the Angolan president was with his wife Ana Dias Lourenço, King Felipe VI was honored by the invitation to visit Angola in the future.

Angola is a priority country for Spain and counts on his confidence and that of the international community to promote the economic and social progress of that country, Spain’s head of State highlighted at the Zarzuela Palace.

At the lunch, there were also present: the Government’s President Pedro Sanchez who met Lourenço at the Moncloa Palace right after to hold an exchange, which according to official sources, confirmed the good harmony between the two leaders.

Thus, in keeping with the desire to continue strengthening cooperation relations at the highest level, a joint statement was signed, when both countries celebrate the 44th anniversary of the establishment of diplomatic ties on October 19.

‘Spain wants to contribute to the design of the EU (European Union) policy towards Africa so that it is oriented towards the progress and industrialization of the continent, the creation of employment, especially for young people, and to the effective implementation of the Continental Free Trade Area,’ Sanchez said.

He also considered Angola a priority country because of its political weight, regional projection and huge economic potential.

‘That is why, it is one of Spain’s main partners in sub-Saharan Africa and our country is one of Angola’s main supporters to the European Union,’ he underscored.

Angola is part of the ‘3rd Africa Plan’ of 2019 and the Action Program ‘Focus Africa 2023’ that Spain has developed.

Sanchez recalled the announcement he made a week earlier at the United Nations. Of the 30 million vaccines that Spain has committed to donate to different countries, 7.5 million will go to countries in Sub-Saharan Africa and the Southern Neighborhood.

In a Joint Statement, Spain and Angola committed to deepen bilateral relations and strengthen sectors of economic interest for Spanish companies and investments in that country, in sectors such as water treatment, industrial refrigeration, health, education, training or geology.

Madrid also discussed the collaboration in the Navy, academic and cultural domains.

Hezbollah insists on obligations over crisis in Lebanon

Cuba and Spain to expand the market for computer applications

Hezbollah insists on obligations over crisis in Lebanon

Cuba and Spain to expand the market for computer applications