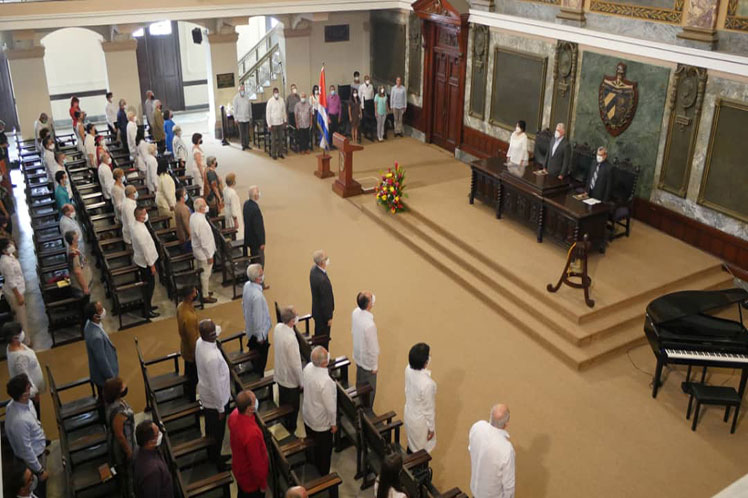 At the ceremony, they presented the Alejo Carpentier medal to two prominent personalities in historical studies, the Distinction for National Culture to other notable historians, and the 2020 National History Award.

Doctors Francisca López and Mildred del Carmen de la Torre, national awards for History, received the Alejo Carpentier medal from the president, in recognition of the relevant merits achieved in artistic and cultural interpretation and promotion; as well as for having a reference work in the analysis of political and cultural processes.

Meanwhile, Carmen Almodóvar, Angelina Rojas, María Caridad Pacheco, José Boris Altshuler and Julio César González were creditors of the Distinction for Cuban Culture, for their contribution to the development of culture and nationality.

The National History Prize 2020 was received by Alberto Prieto, emeritus doctor of the University of Havana, who for more than 50 years has developed a meritorious work in teaching, research and promotion of this area of ​​studies, with more than 20 books published and where the analyzes on Latin America stand out.

Likewise, the historical critic awards were given to the best texts on the subject, which went to Ernel Pérez, Aldo Daniel Naranjo and José Luis Méndez.

With this ceremony, in which members of the Political Bureau of the Communist Party, ministers and other government figures, as well as historians and university professors participated, the days of celebration for the 40th anniversary of the Union of Historians of Cuba began, which will be held on December 7.