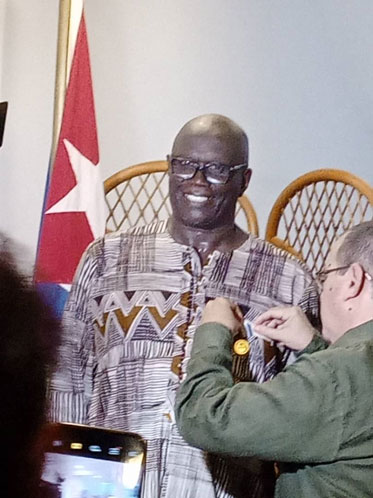 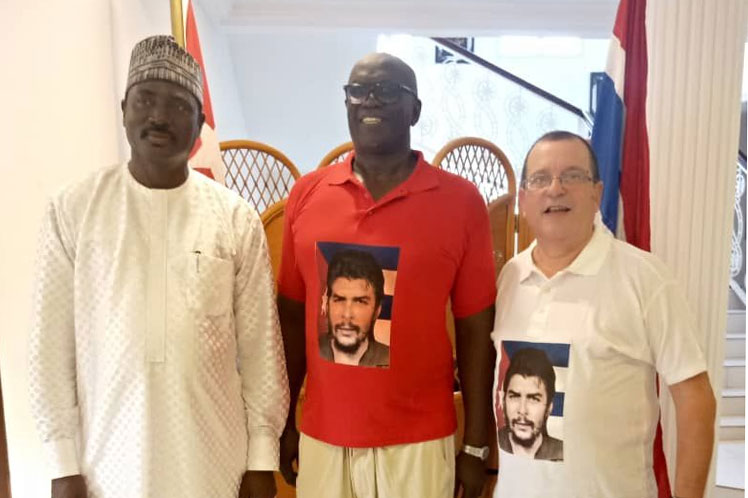 After decorating him on October 8 at the Cuban Embassy in the presence of the Gambian Foreign Minister, Mamadou Tangara, and other guests, Grant expressed, with the modesty that characterizes him, that this high distinction is not only his, but also that of all his compatriots, who admire and appreciate the historical help of the people and government of the Caribbean island to their country and to Africa.

Moved by the recognition received, proposed by the Cuban Institute of Friendship with the Peoples (ICAP, in Spanish), the loyal friend paid tribute to the Heroic Guerrilla Commander Ernesto Che Guevara, on the commemoration this October 8 of another anniversary of his fall in combat in Bolivian lands, and to the historic leader of the Cuban Revolution, Fidel Castro.

He said that since he was very young he has been a great admirer of Che and Fidel, about whom -he affirmed- they were men of great sympathy towards Africa, and will always live in our hearts because of their example.

We also heard very moving words from the Gambian Foreign Minister at the closing of the ceremony, when he said that the Heroic Guerrilla Commander sowed seeds throughout this region that will germinate forever.

Likewise, Tangara thanked Commander in Chief Fidel and his people for the selfless cooperation they have given to Gambia, and which they continue to do in different spheres, especially in the area of health, in the midst of the Covid19 pandemic that is ravaging humanity.

The phrase pronounced by the Minister of Foreign Affairs will go down in history, when he said that ‘Cuba is the most African country in the world outside Africa’, in a clear allusion to the friendship, brotherhood and blood ties, cultural and emancipating struggles that unite us.

The activity was attended by the deputies of the Gambia-Cuba Parliamentary Friendship Group Assan Touray, Babagalleh Jalow, and Isatou Sonko, secretary of that group of the National Assembly.

Also in attendance were young Gambian graduates from Cuban universities, and a representation of the Cuban Medical Brigade that heals and saves lives throughout the territory of this West African nation.

At the end of the ceremony a doctor said that ‘today we distinguish the dear Grant with the Friendship Medal, but at the same time we Cubans were decorated with much love and gratitude from this brotherly people’.

(*) The author is the Cuban Ambassador to Gambia who often collaborates with Prensa Latina.