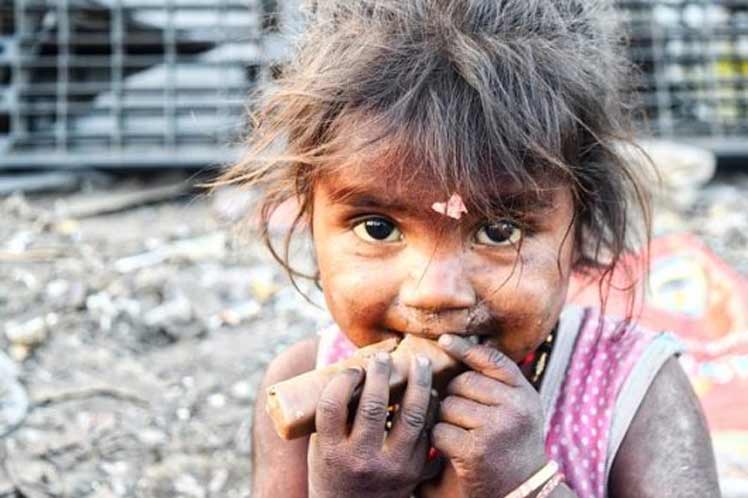 New Delhi, Oct 14 (Prensa Latina) The Global Hunger Index (GHI), a tool that measures and tracks hunger globally as well as by region and by country, launched on Thursday ranked India at 101 position out of a total 116 countries.

India is also among the 31 countries where hunger has been identified as serious. India ranked 94 among 107 countries in the Global Hunger Index (GHI) released last year.

Current projections based on the Global Hunger Index (GHI) show that the world as a whole — and 47 countries in particular — will fail to achieve even low hunger by 2030.

Based on the values of the four indicators – undernourishment, child wasting, child stunting and child mortality- the GHI determines hunger on a 100-point scale, where 0 is the best possible score (no hunger) and 100 is the worst. Each country’s GHI score is classified by severity, from low to extremely alarming.

Somalia has the highest level of hunger according to the 2021 GHI ranking — its GHI score of 50.8 is considered extremely alarming.

It is preceded by five countries with levels of hunger that are alarming — Central African Republic, Chad, Democratic Republic of the Congo, Madagascar, and Yemen — and 31 countries that have serious levels of hunger.

‘Although GHI scores show that global hunger has been on the decline since 2000, progress is slowing. After decades of decline, the global prevalence of undernourishment — one of the four indicators used to calculate GHI scores — is increasing. This shift may be a harbinger of reversals in other measures of hunger,’ says the report.

Egypt to allocate land to Indian industries in Suez Canal

Cuba is grateful for the donation of vaccines from Panacea Biotec

Egypt to allocate land to Indian industries in Suez Canal

Cuba is grateful for the donation of vaccines from Panacea Biotec