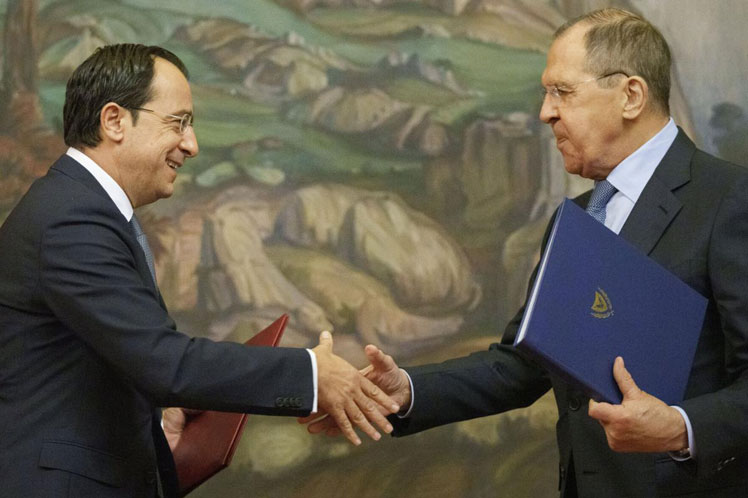 On speaking to the press after the negotiations, Lavrov highlighted bilateral ties, ‘as regularly confirmed by Russian naval vessels calling at Cypriot ports.’

Meanwhile, Christodoulides said that his country highly appreciates Russia’s position in the UN Security Council on the need to replace the current system of guarantees for Cyprus.

He praised Moscow’s clear position in favor of the abolition of the anachronistic 1960 safeguards system and a clear approach to the pursued goal of resolving the Cyprus problem.’

In addition, Christodoulides expressed the hope that the UN Security Council would play an important role in the settlement of the Cyprus conflict based on the relevant UN resolutions and called for Russian support in that matter.

In July 1974, Turkish military invaded the northern part of Cyprus, occupying 37 percent of its territory in response to the Nicosia authorities’ attempt to unite the island with Greece.

The northern part was occupied by a Turkish Cypriot minority, which accounts for almost 20 percent of the population, while the other two-thirds of the territory, in the south, is inhabited by Greek Cypriots.

In 1983, the Turkish Republic of Northern Cyprus was proclaimed in the occupied territories, recognized only by Turkey.

Negotiations on the reunification of Cyprus have been going on practically since the time of its division, although they have been suspended on several occasions.