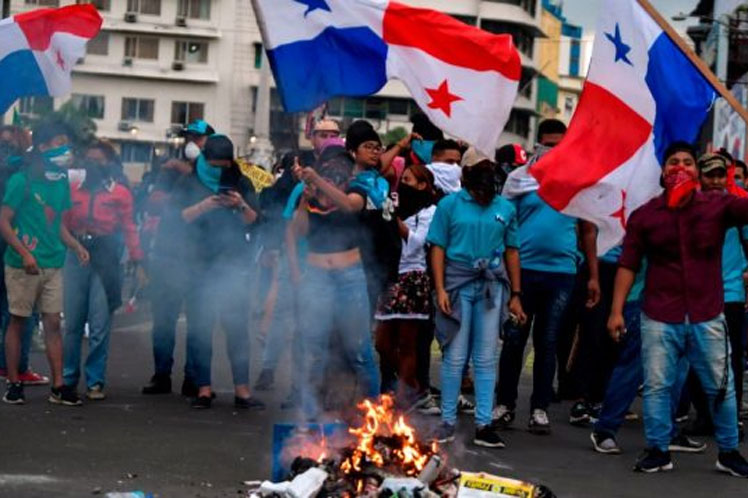 Transporters from several sectors of the capital and the interior of the country joined on Wednesday the national strike called by the National Transportation Chamber (CANATRA) in rejection of the fuel inflation, which prevented the mobility of thousands of people and generated the deployment of the National Police.

In statements to Radio Panama, the president of Canatra in the neighboring province of Panama Oeste, Jorge Dimas, explained that so far the conversations held with the authorities five months ago to negotiate and request the freezing of fuel costs have had no effect.

The measure caused the closing of streets and important national access roads in the main cities of the provinces of Colon (Caribbean) and Nata (center of the country), as well as Chilibre (north of the metropolitan area of the capital), which led to arrests and the use of force in some cases.

Meanwhile, in Colon, different labor and social unions have been on ‘strike’ for several days due to the inaction of the Government regarding the construction of works, lack of jobs and economic reactivation.

In that respect, the Minister of Housing and Territorial Planning Rogelio Paredes, who is part of the negotiating commission in that province, acknowledged that there are delays in the construction of hospitals and other infrastructure as a result of legal conflicts, inherited from previous administrations.

However, ‘we are willing to accelerate what can be accelerated,’ the head of the commission assured, who is currently trying to dialogue with a group of people who were forcibly evicted from the community where they settled in areas of state lands.

According to Paredes, in that place they previously delivered houses to residents and when the improvised ones were left empty, they were illegally taken by others, so after the ‘launching’ (legal term) they destroyed them, which caused some affected people to attack the Nicolas Solano de la Chorrera hospital, annexed to the occupied land.

On Wednesday afternoon, the nurses are also expected to march, demanding the payment of overtime worked and expired due validities, while the ticket clerks and administrative staff of the ‘Loteria Nacional de Beneficencia’ will demand the cancellation of their bonuses.

In the case of the nursing personnel, it is not the first time that they stop work and take to the streets amid the Covid-19 pandemic to demand, in addition, better working conditions and the fulfillment of the agreements reached on April 28 with the authorities of the Ministry of Health and the Social Security Fund.