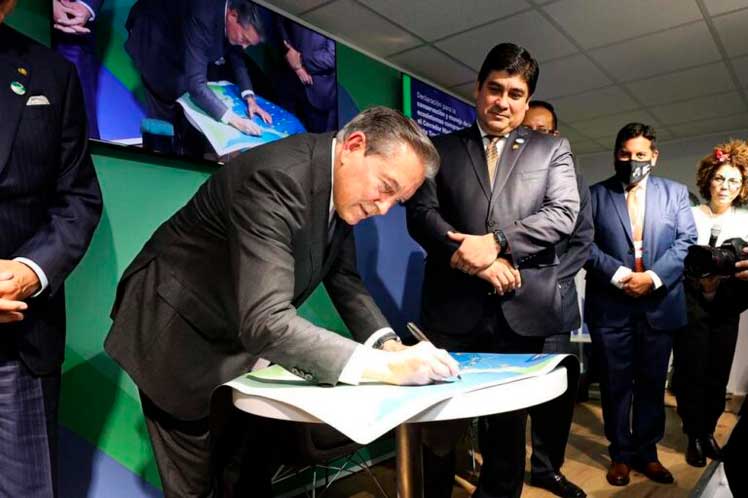 Proposed by the Presidents of Costa Rica, Carlos Alvarado; from Ecuador, Guillermo Lasso; from Colombia, Iván Duque; and from Panama, Laurentino Cortizo, the declaration was considered by these leaders as a milestone in the development of the United Nations Conference on Climate Change (COP26), which is held in this Scottish city.

The four countries pledged to carry out different national and regional efforts on these islands and the corridors that connect them, including carrying out a process that would conclude with the creation of a Marine Biosphere Reserve between the islands.

The Tico president said that from Latin America, four countries have become even more twinned to send a clear message to the world that we must move forward with actions to protect our planet and, in this case, the oceans.

After pointing out that the protection of nature is a fundamental step to face climate change, Alvarado described having healthy oceans as vital in order to protect hundreds of marine species that are important for the ecosystems and for the people of the region.

He stressed that they are not conserving just any ecosystem, but rather valuable ones such as those of Galapagos, Isla del Coco and its surroundings, which he – he said – are among the most important in the world.

For his part, Lasso said that COP26 is justified by this very important act, in which – he specified – both the environment ministers and the foreign ministers of the four signatory nations have worked.

During the initiation, they revealed that various scientific studies show that the Isla del Coco National Park and the Submarine Mountains Marine Management Area, in Costa Rica; the Galapagos Marine Reserve, in Ecuador; the Malpelo Fauna and Flora Sanctuary, in Colombia, and the Coiba National Park and the Cordillera Coiba Managed Resources Area, in Panama, constitute a unique interconnected ecosystem.

The waters between these islands function as biological corridors through which sharks, tunas, turtles, rays, whales and many other migratory marine species transit, they said and added that these so-called “migratory routes” connect the islands and provide enormous services to ecosystems and the communities of the region.

With the signing of the declaration, they advanced, the four countries agreed to begin a process of dialogue to achieve these ends and safeguard the oceanic heritage of humanity.