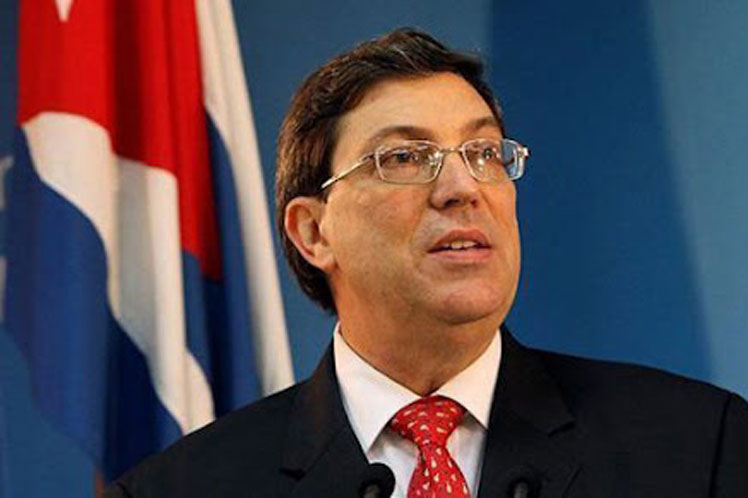 “It is hypocritical that the US does not tolerate interference in its internal affairs but promotes and finances destabilizing actions aimed at subverting the constitutional order in #Cuba,” Rodriguez tweeted.

The FM deemed that such maneuvers try to cover up the outrage of Washington’s criminal and inhuman policy.

Lately, the Cuban Government has presented numerous proofs of the links among the promoters of an illegal march in Cuba and representatives of organizations such as the Cuban-American National Foundation and Movimiento Democracia, headquartered in Florida.

From sectors of the Cuban-American ultra-right wing settled in that US state to US government representatives made explicit their support to that action, and reiterated their wish that it would provoke a change of regime on the country.

In that sense, specialists from different social branches have warned of the Unconventional Warfare or soft coup d’état script that is being tried to be applied in Cuba following the parameters of a supposed non-violent struggle.

Fake news, emotional manipulation, institutional rupture and the creation of opinion leaders are some of the tools of the strategy described in the book on the known soft coup by US political scientist Gene Sharp.

In that regard, Cuba recently showed the testimony, accompanied by photos, audios and videos, of physician Carlos Leonardo Vazquez, who for 25 years had been “Fernando” agent of the State Security Organs.

In those statements, the agent presented evidence that a promoter of the march and leader of the Archipelago website, Yunior Garcia, seeks a clash with the security forces to generate insecurity and destabilization.

Regarding so, “Fernando” agent told about his participation along with Garcia in training programs for political leaders at the service of foreign interests.

In 2019, a workshop sponsored by the US University of Saint Louis hosted both Cubans, who learned about “the role of the armed forces in a transition process”, Vazquez said.