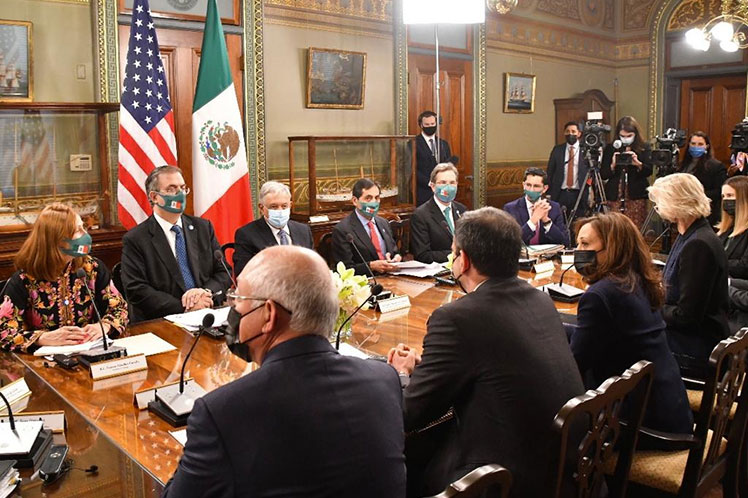 The Mexican president held a meeting with Harris a few minutes before starting the tripartite summit with President Joe Biden and Canadian Prime Minister Justin Trudeau in Washington DC.

Although the meeting was behind closed doors, a video was released to the press with the visitor’s opening words in which he informed his interlocutor about the issues that Mexico is taking to the so-called North American Leaders Summit.

Among these, migration is probably at the head of the list, although economic integration occupies an important space.

After highlighting that the relationship between his government and President Biden’s is very good, López Obrador immediately addressed the immigration issue to emphasize his well-known criterion that if its causes are not eliminated, the powerful flow of the exodus will not abate.

He insisted that we must invest so that there is work and well-being in Central America and other vulnerable countries that emit migrants so that people are not seen in the need to leave their land, and that migration becomes optional, not forced, as people abandon their villages and families due to economic necessity or social violence.

For this reason, he said, the importance of economic cooperation with Central America, is the way to stop the migratory flow.

The information we have is that the United States is in favor of that thesis and is going to help in this regard and we are very happy about that.

All this, he pointed out, will also help to strengthen the economic integration of North America, since ordering the migratory flow is a necessity due to the lack of labor that the North requires to grow.

Speaking on the issue of integration and development, López Obrador insisted on his thesis that North America should produce everything it consumes and not depend on imports, and that is valid not only for this region but for all of America, including the south and center, that is, the entire continent.

I believe that the integration of America as a whole, with respect to sovereignty and its forms of government, is a great option to make the region stronger economically, and that we will raise with great respect at the summit.

Likewise, we support President Biden’s initiative to regularize the situation of 11 million undocumented migrants and we ask Democratic and Republican legislators to help because it is fair.

It is about benefiting a great mass of workers who have lived in the United States for a long time and contribute with their efforts to the development of this country, he said.

Harris’s words do not appear in the video, but only the moment in which she invites the Mexican president to speak.