Organizers of “A path of love” in Italy highlight results 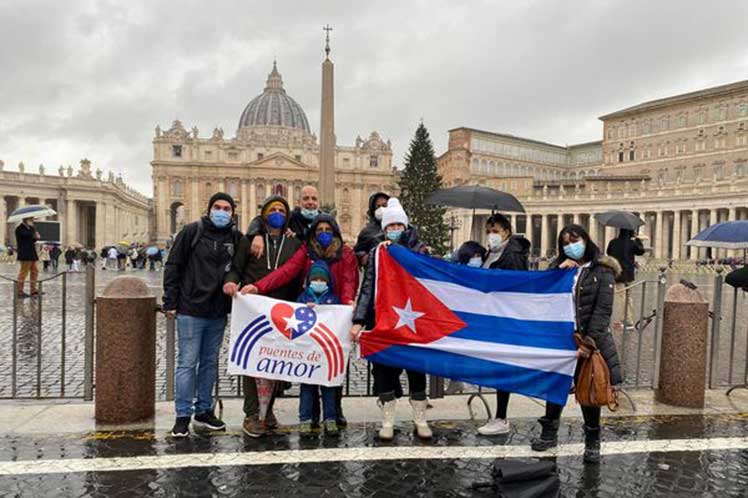 Organizers of “A path of love” in Italy highlight results

The six-day program of activities began with a public assembly in the Citadel of Assisi, headquarters of the Pro Civitate Chistiana lay association, from where a hundred-kilometer pilgrimage in four stages departed to Rome, along the path of Saint Francis, recognized for his humility, altruism and preaching of peace.

Upon arrival in Rome, the group made up of Cubans residing in Italy and the United States, Italians and a Bolivian woman, was welcomed at one of the San Egidio Community headquarters and participated in a binational assembly with a simultaneous transmission between Havana and Rome.

The procession attended the demonstration in St. Peter’s Square on Saturday to receive the Urbi et Orbi blessing (to the city and the world) given by Pope Francis on the occasion of Christmas.

The “Bridges of Love” project, the Association for Cultural and Economic Exchange with Cuba, the Coordinator of Cuban Residents in Italy, AsiCuba Umbría, the San Egidio Community, the Sano, Justo y Solidario network and the Student Missionary League sponsored the event.

The coordinator of Puentes de Amor (Bridges of Love), Carlos Lazo, stressed in statements to Prensa Latina that the pilgrimage exceeded expectations because, among other things, it built a community of walkers.

“That is, humanity, younger, older men and women, walking together through holy places where Saint Francis passed to try to fill us with that aura of mysticism and holiness with which to carry the voice of love and peace, and apply it specifically in favor of that noble people that is the Cuban people,” he said.