Cuba will receive texts from Mexico for International Book Fair 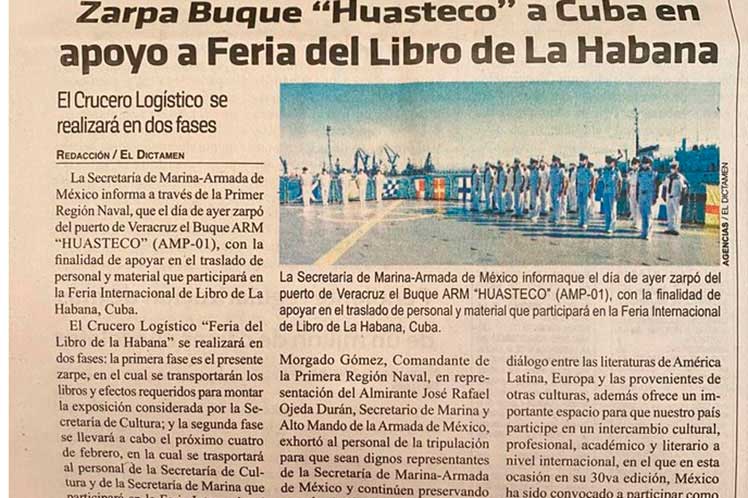 Cuba will receive texts from Mexico for International Book Fair

According to a publication by the communication director of the island’s Ministry of Culture, Alexis Triana, the arrival of thousands of books for the event and donations from Mexican cultural institutions is expected tomorrow.

A long round of applause for the sincere friendship between the peoples of Cuba and Mexico, Triana wrote on her Twitter social network profile and shared a photograph showing the news published in the Mexican press.

According to the information, the ship ARM Huasteco, of the Secretariat of the Navy-Navy of Mexico, sailed from the port of Veracruz bound for the Caribbean nation, under the name of Havana Book Fair Logistics Cruise.

The operation, indicates the note, began yesterday with the departure of the boat that transports books and effects required to mount the exhibition considered by the Ministry of Culture.

For the coming February 4, the personnel of the Ministry of Culture and the Ministry of the Navy will be transported to participate in the important event, scheduled to begin on the 10th with various activities until February 20.

This will be the second time that the Aztec country appears as guest of honor at the Cuban Book Fair and culture festival, since the first time in 1998.

Thanks to Mexico’s willingness to be part of that event, we will be able to access its past and contemporary heritage, said the Minister of Culture of the island, Alpidio Alonso, when announcing the appointment.

“With this invitation we respond to the solidarity expressed historically by the Mexican people, intensified in the Cervantino International Festival and during the visit of President Miguel Díaz-Canel Bermúdez, last September,” Alonso assured.

According to the Cuban Book Chamber, the meeting will pay tribute to Carilda Oliver Labra and Jesús Orta Ruiz (the Naborí Indian), on the centenary of their births, as well as the 140th anniversary of the publication of the Ismaelillo poems by José Martí and from the novel Cecilia Valdés or La Loma del Ángel, by Cirilo Villaverde.