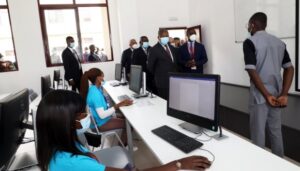 The so-called technology incubator occupies two buildings in the urban district of Rangel, in Luanda, and was officially inaugurated by the President of the Republic, João Lourenço.

Angolans with innovative technological ideas, capable of generating business, will be able to receive support from the entity until they become companies, said the president.

After touring several rooms, the president told the press that the center represents an opportunity for the professional training of young people, who will be better absorbed by the labor market and, above all, will be able to create businesses independently, without the need to wait for an employer.

The investment was financed with state resources and the support of external partners such as the Chinese company Huawei, Afrione, a manufacturer of mobile telephones and laptops, the African Development Bank and the World Bank.

According to the Minister of Telecommunications, Information Technologies and Social Communication, Manuel Homem, Digital.ao will offer training for the development and production of multimedia content, graphic design, digital marketing and management of social networks.

The infrastructure inaugurated today “was not born in isolation, but is part of the medium and long term strategy for the massification and digital inclusion throughout the national territory”, which involves various sectors, he said.

According to the general director of the National Institute for the Promotion of the Information Society, André Pedro, the facility will also offer services in the areas of .ao domain registration, software manufacturing, web page and corporate mail hosting, equipment repair and international certification.