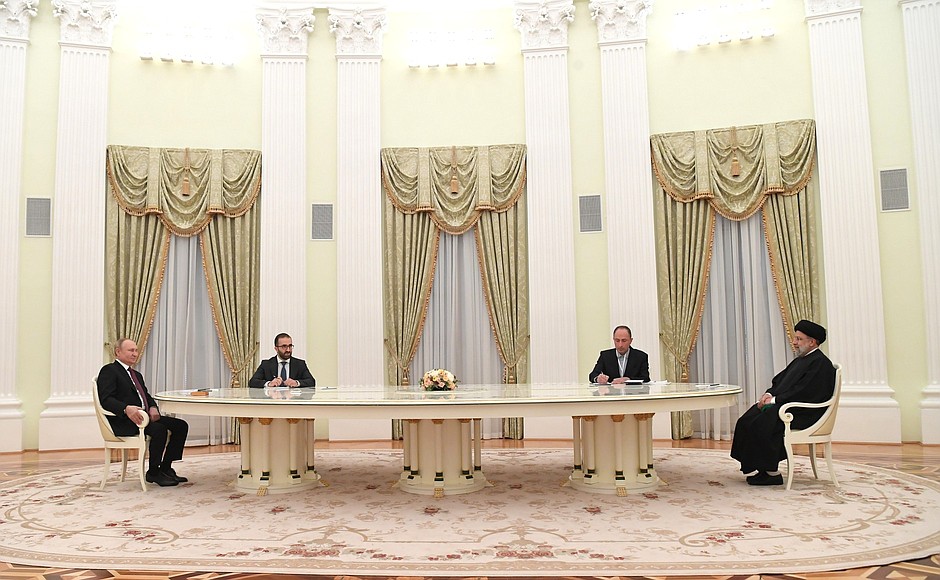 He pointed out that the good experience of joint collaboration between Moscow and Tehran during the fight against terrorism in Syria could be applied in other directions.

According to Raisi, under the current conditions, Iran can develop cooperation with Russia in the fields of economy, politics, culture, science, technology, defense and military, as well as security and space.

During the meeting, both leaders also discussed Western sanctions against that Islamic republic.

“We have been countering the Americans for over 40 years. And we will never stop the progress and development of the country because of sanctions or threats,” stressed the Iranian leader, who indicated that Tehran is making efforts to ensure that these measures are lifted.

At the beginning of the dialogue, the Russian president stressed that, to a large extent, Syria overcame terrorist threats thanks to the help of their countries.

“Our efforts, to a great extent, helped the Syrian government overcome the threats posed by international terrorism,” he said, according to the Kremlin’s official website.

Putin proposed Raisi to discuss the situation in Afghanistan, since the events in that country are a concern to both parties. He stressed that Moscow and Tehran cooperate “very closely” in the international arena.

He highlighted that despite the Covid-19 pandemic, in 2020 both countries achieved a slight but constant growth in trade, by more than six percent; while last year it was higher than 38 percent.

He stressed that Russia and Iran implement a group of important projects and work in various areas of development. The Russian president meant that on the basis of a temporary agreement, relations between Iran and the Eurasian Economic Community (EEU) are moving forward.

In this regard, he drew attention to the creation of long-term complementation mechanisms, in addition to a free trade zone between Iran and the EEU.

Putin emphasized that another important point of the meeting will be the analysis of the progress in the negotiations on the Joint Comprehensive Plan of Action (JCPOA) on the Iranian nuclear program.