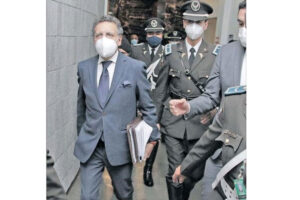 The decision was made by Judge Felipe Córdova, who also extended the call to 12 other people involved in the so-called Las Torres case, including the former manager of the public company Petroecuador Pablo Flores.

The diligence was completed one month after the suspension of the preparatory trial hearing for those investigated as part of an alleged structured corruption network.

The Prosecutor’s Office accuses Celi and Flores of leaders of organized crime acts, whose sentence could be between seven and 10 years in prison.

The rest are investigated as collaborators, with possible sentences of five to seven years in prison.

According to the exposed elements, in the period from 2017 to 2020, government officials, with the help of officials from public institutions and public private entities, consolidated a network that allowed them to obtain economic benefits from infractions.

According to the Prosecutor’s Office, the Las Torres case responds to investigating the operation of a criminal structure in Petroecuador, the Comptroller General of the State and the General Secretariat of the Presidency in the aforementioned period.

Management and collection of bribes to state contractors, such as the Nolimit company, in exchange for the payment of overdue invoices and the disappearance of glosses, are some of the operations allegedly carried out by the group.

Initially, José Augusto Briones was part of the process, but he died in Prison 4 of Quito, in May of last year, in an alleged suicide.

Meanwhile, Celi and Flores have been in preventive detention since last April 13.