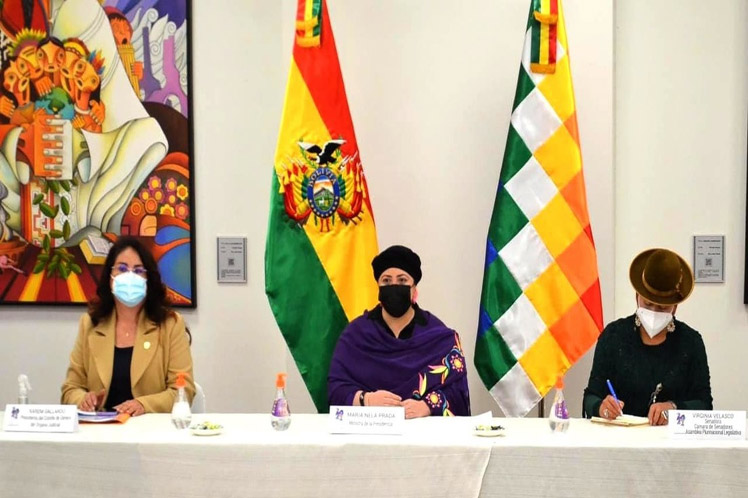 “Ten people illegally favored by bad judges were recaptured, two for the crime of femicide, two for rape, six for murder of women or minors before the classification of femicide as a crime”, confirmed the Minister of the Presidency, María Nela Prada.

The Minister affirmed before the press that since the first day of the constitution of this investigative committee by instructions of President Luis Arce, the results were positive.

Prada regretted that at the base of all these cases is the cover-up and criminal action of “bad judges” who, through consortiums, are dedicated to freeing convicted persons without the right to pardon.

As an example, she recalled the case she described as “chilling” of the murderer and serial rapist Richard Choque Flores, who after being released by the former judge, now indicted, Rafael Alcón, committed new crimes of rape and femicide.

The Minister informed that as a result of the intervention of all the criminal courts, so far nine judges have been charged, four of which are under arrest, one is under house arrest and 4 more are under investigation.

The investigation into the Choque Flores case alone led to the imprisonment of 11 people: the murderer and serial rapist, the former judge Alcón, two lawyers, a doctor, two social workers, a former prosecutor and three family members who were accomplices.

On the same date as Prada’s statements, the Minister of Government, Eduardo del Castillo, informed representatives of the media of the recapture of Abraham Peters Dick, who paid 25 thousand dollars to obtain his freedom, despite a sentence of 25 years in prison without the right to pardon.

Peters Dick raped 150 women in a Mennonite colony in Santa Cruz and was sanctioned, but in 2018 he was released with the favor of a criminal network made up of his lawyer, a judge and a sociologist, according to the investigation.

Del Castillo added that the recaptured confessed the figure delivered to his defender, Juan Carlos Z., to process his freedom irregularly.

“The money was given to his lawyer, who had the contact with the director of the El Bajío hospital for drug addicts, where he would supposedly have to serve part of his sentence until he were rehabilitated, however, this criminal never set foot in that place,” concluded the official.