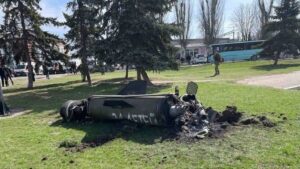 “We are sure that the Kiev authorities will not be able to escape responsibility,” the statement said, referring to the launch of a Tochka-U missile against a train station in that town of the self-proclaimed Donetsk People’s Republic (DPR).

According to the regional administration, of the 50 dead, five are children. A total of 98 people were taken to hospitals in Kramatorsk, including 16 children, 46 women and 36 men.

“Twelve of them died in the hospital, 38 people died at the scene, at the station,” the head of the Donetsk Regional Military Administration, Pavel Kirilenko, posted on his Facebook site.

The Russian Defense Ministry reported the attack on Kramatorsk was carried out by a division of the Ukrainian Missile Troops from the town of Dobropolie, located 45 kilometers from the city, an area that is still controlled by the Kiev units.

“Analysis of the blast radius of the warhead, as well as the characteristic position of the tail casing of the Tochka-U missile, clearly confirm that it was launched from the southwestern direction of Kramatorsk,” he said.

According to the military body, the Tochka-U tactical missiles, the remains of which were discovered near the train station, are only used by the Ukrainian Armed Forces.

He explained that the objective of the attack was to prevent “the massive departure of residents of the city to use them as human shields and thus defend positions of the Armed Forces of Ukraine, as in many other locations” in the country.

The Defense portfolio denounced that, to blame the country, the Ukrainian authorities released images of the Tochka-U systems that participated in the joint military exercises of Russia and Belarus in February 2022.

He stressed that in the published images it can be seen that the missile complexes do not belong to the Eurasian giant.

After the attack, the adviser to the head of the Presidential Office of Ukraine, Alexei Arestovich, stated that “Russian troops attacked the Kramatorsk train station with an Iskander-type missile.”

However, in the statement issued shortly after, Ukrainian President Vladimir Zelensky, in which he also blamed the Russian military, said the attack was carried out with a Tochka-U missile.

The deputy head of the forces of the self-proclaimed DPR, Eduard Basurin, said this morning that immediately after the events from Kiev they began to say that the missile was launched by Russia.

“But the means that people have, I mean the phones, the cameras, recorded that there were remains of a Tochka-U,” explained the DPR official.

For the head of the DPR, Denis Pushilin, the act constituted “another monstrous provocation, another war crime of the Kiev regime. Everything is clear to us, the Kiev regime does not consider these people as its own, it stops at nothing”, he told Russia 1 television.

The official warned that this bombing will not be the last provocation of the Ukrainian Armed Forces, for which he called on the population “to prepare and counteract these war crimes, if possible.”