The world demands an end to the US blockade against Cuba 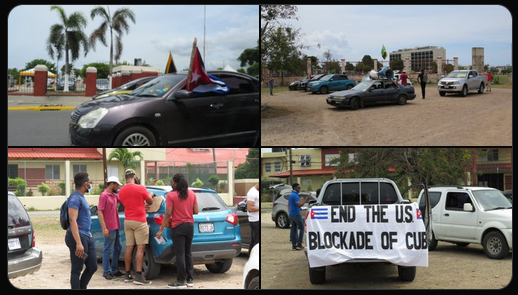 The world demands an end to the US blockade against Cuba

In the US city of New York, activists joined the cry of Cuba yes, blockade no! convened by the Bridges of Love initiative, the general director of Consular Affairs and Cubans Resident Abroad, Ernesto Soberón, reported on his Twitter account.

Also in Guatemala, Mexico, and other Latin American countries, they demanded the definitive lifting of the siege of Washington.

From Timor-Leste, the Friendship Association of that nation with Cuba called on the administration of Democrat Joe Biden to end the blockade and the hostility policy of his government.

In Milan, Italy, compatriots and supportive friends express their support for the island against the aggressiveness of the White House, and similar marches are held in the cities of Miami and Portland, in the United States; Vancouver and Toronto, Canada.

The day before, in the city of Portland, US state of Oregon, members of solidarity organizations demanded an end to the hostility of the United States Government, an action that they described as cruel, inhuman and criminal.

The participants also demanded the return of the illegally occupied territory in Guantánamo, where that northern power maintains a military base against the will of the people and government of Cuba, and for the elimination of restrictions on travel to the island that weigh on Americans, among other demands.

Washington has imposed a tight blockade against the Caribbean nation for more than six decades, intensified with more than 240 measures dictated by the Donald Trump administration (2017-2021), 55 of them in the midst of the Covid-19 pandemic.

The current US administration, led by Democrat Joe Biden, maintains that policy in force, despite promises of change during his presidential campaign.