Hotel Saratoga and the fight for life 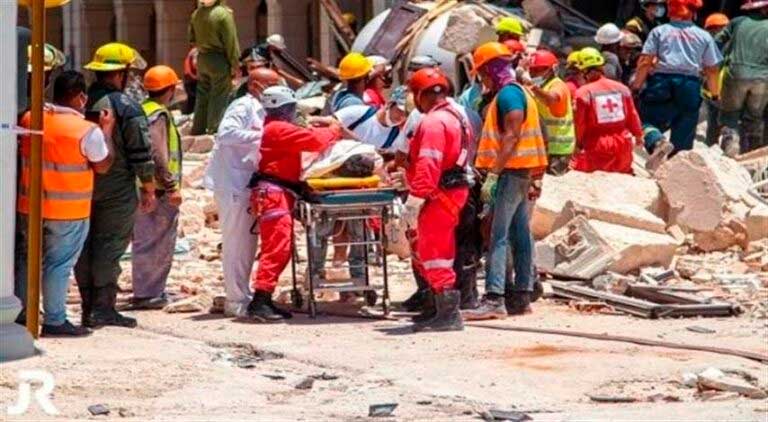 Hotel Saratoga and the fight for life

A cloud of dust hides the faces of rescuers, builders and paramedics, who in coordinated choreography enter and leave the disaster zone, since more than 90 hours ago the central corner of Old Havana was surprised by an explosion.

In the Fraternidad park, near the hotel, several of these anonymous heroes take advantage of their break time to communicate with their loved ones or plan a new exploration site in front of a map, until a signal calls them to replace their companions and with the tight helmet they plunge back into darkness and fear.

This is one of the most complex operations of its kind in recent years in Cuba, several say, in which all techniques available in the country have been used: from the canine brigade to drones.

At the moment, a gesture puts everyone on edge and the heavy machinery is removed to make way for an ambulance, but it is a false alarm and another group of rescuers re-enters saying “Now we are going to find something”, with an optimism that does not decrease with the hours or with fatigue.

In the park itself, whose name seems to be a symbol at the moment, several approach the relatives of victims to express human and material support and once again, in the face of anguish, words of optimism are not lacking.

At the Concepción Arenal school and the Martí theater, two of the facilities heavily impacted by the explosion, work is already under way to recover them. The architectural traces of the disaster begin to disappear, the emotional ones will take a little longer.

At the moment it is not specified if the hotel and the apartment building next door can be recovered, and their facades remain open and in ruins, as if a gigantic sinister hand had torn them apart.

Beyond the security cordon that extends for several blocks, the dizzying life of the city continues. Passers-by who stop at the corner of Reina and Industria streets try to capture, from a distance, an image of the disaster or the feat of men and women fighting for life.