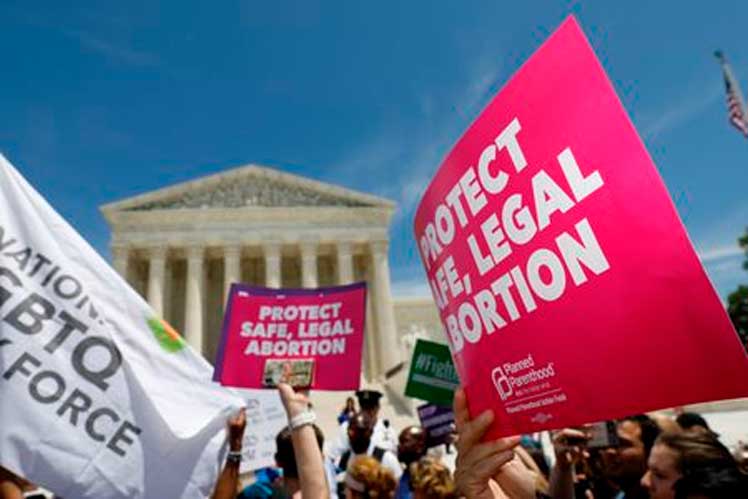 Washington, Jul 14 (Prensa Latina) The US Supreme Court´s (SCOTUS) decision on overturning the right to abortion could help some Democrats in tight midterm contests, the Vox news portal reported Thursday.

In seven states (Georgia, Pennsylvania, Michigan, Kansas, Wisconsin, Nevada, and Arizona), in which Democrats and Republicans have conflicting visions on abortion access, voters can elect to those who advocate ensuring reproductive rights for women, the media noted.

In some states, Democrats hope to wield veto power over legislation from Republican-controlled state legislatures that want to curb abortion rights. Elsewhere, Republicans want to use governorships to defend existing state laws restricting abortion and are charting a path to further curb access to the procedure.

As has been the case in many national races, GOP gubernatorial candidates have generally been less vocal about their stance on abortion than their Democratic opponents.

While analysts are predicting a majority red victory for coming midterm elections, given polls show the Joe Biden administration´s approval ratings at abysmally low levels, the scenario could change at the local level in some states.

Abortion rights currently seem to give voters a boost for Democrats who defend women’s right to decide about their bodies.

As of a Politico/Morning Consult poll from late June, 43% of respondents –for example- said it was very important to vote for a candidate who “supports abortion access.”

On June 24, SCOTUS decided on overturning the 1973 Roe vs. Wade and thereby causing what many consider to be a 50-year setback. President Joe Biden signed last week an executive order to ensure abortion access, but many said it will have no practical effect.