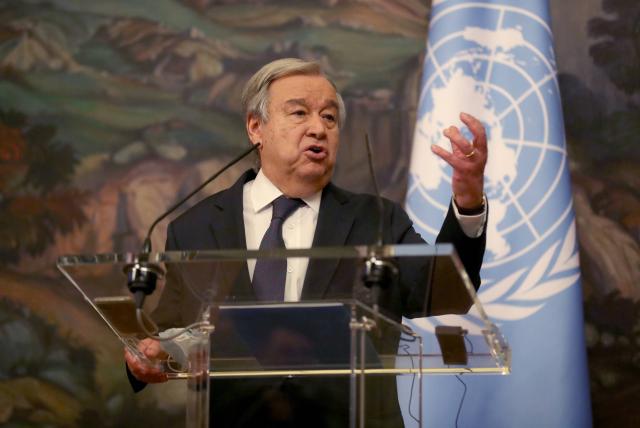 There is a critical juncture for collective peace and security, Guterres said at the 10th NPT Review Conference at the UN Headquarters in New York.

Guterres recalled the NPT Conference – which began on Monday – has been greatly delayed as a result of harsh situation caused by the Covid-19 pandemic, “but its importance and emergency have not decreased”.

Climate crisis, severe inequalities, conflicts and human rights violations, as well as both personal and economic destruction caused by the pandemic, “have put our world under greatest stress ever faced.” This comes at a time of nuclear risk not seen since the heyday of the Cold War, he added, while urging the international community to strengthen NPT.

“We urgently need to strengthen and reaffirm NPT, which have been fighting atomic weapons for 77 years”, Guterres said in reference to NPT.

The UNSG called for finding some practical measures to dwindle nuclear war risk and put us back on the path of disarmament.

States are presently seeking false security by stockpiling and spending hundreds of billions of dollars on weapons that have no place on our planet, Guterres stated.

“There are today nearly 13,000 nuclear weapons around the world,” Guterres emphasized.

All this, he pointed out, at a time when the risks of nuclear weapons proliferation are increasing and barriers to prevent an escalation are weakening, and also as the crises -with nuclear nuances- are festering.

Hence, Guterres called for the “firm commitment of all States” because humanity “is just one misunderstanding and one miscalculation away from nuclear annihilation.”