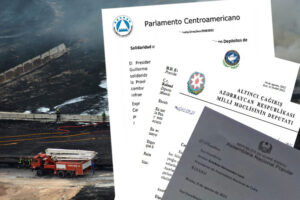 The Global Council and the International Parliament for Tolerance and Peace sent a letter to the National People’s Power Assembly of Cuba in which they expressed “respect and admiration for the work of relief agencies, which have taken the initiative to prevent further material damage and human losses.

The letter, signed by Council President Ahmed Bin Mohamed Aljarwan, reiterates the “respect and admiration for that brother people,” according to the website of the Cuban Parliament.

Central American Parliament (Parlacen) Speaker Guillermo Daniel Ortega Reyes, and the Board of Directors, for their part, valued the efforts of the relief corps, the solidarity from Mexico and Venezuela, which immediately provided material help and specialists.

In a statement, the Parlacen called on the international community to support efforts to prevent further damage from the incident in the same way that Cuba has come to the aid when other nations have needed it.

The president of the National Popular Assembly of Guinea-Bissau, Cipriano Cassama, also sent a letter to his Cuban counterpart, Esteban Lazo, in which he expressed his condolences and solidarity in light of the disaster in Matanzas.

The Chamber of Deputies of Argentina issued a statement in which it indicated that Cuba “has written epic pages throughout its history, we regret the human losses and we expressed our condolences to the families of the victims.”

The Greek communist lawmakers at the European Parliament, Kostas Papadakis and Lefteris Nikolaou-Alavanos, sent a letter to Cuban Ambassador to the European Union Yaira Jimenez Roig, in which they expressed the solidarity of their party with the Cuban Government and people.

The text points out that amid the difficult situation in Cuba, “the intensification of the fight against the US criminal blockade against Cuba becomes even more necessary and its lifting even more imperative.”

Lawmaker Elshad Mirbashir Oglu, head of the Azerbaijan-Cuba Inter-Parliamentary Relations Working Group, also expressed his people’s solidarity with Cubans, as well as their condolences to the families of those killed in the fire.