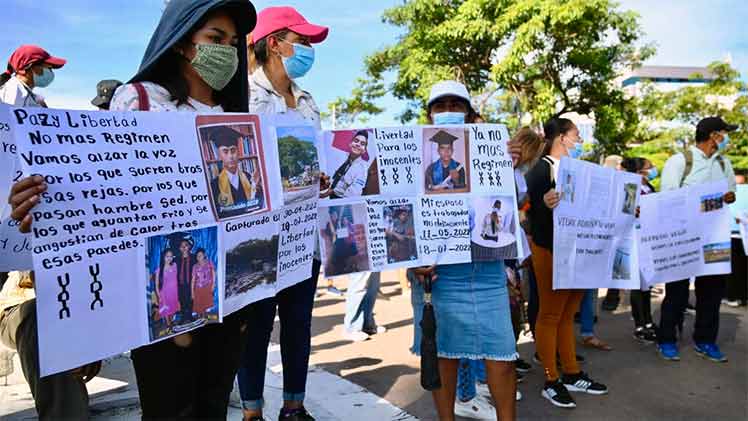 A report published by the Prensa Gráfica newspaper touches on a thorny issue that has divided Salvadoran society between critics and supporters of the government’s heavy-handed policy against criminal groups, facilitated by the state of emergency that is due to end late this month after being extended several times since its enforcement last March.

The relatives of the detainees ask that the people be investigated before arresting them and that the innocent be released, as per an extensive article published by Prensa Gráfica, touching on one of the topics that is common news in the country.

“The military here have razed everything. I assure you that each family here has at least one relative detained since the policy began,” a local woman described when addressing the situation in Usulutan, where the inhabitants affirm that the municipality is now dominated by the military.

The only thing that the source dares to say is that in the municipality the authorities captured few gang members and many innocent people.

The soldiers captured fishermen, boatmen, hairdressers, motorists and even a former mayor of the municipality. And those who remain live in fear of being next, according to the stories published by the publication.

“It would seem that one is being dramatic, but it is not like that. This exception regime has been much worse for us than the gangs. They really are much worse than the three gangs together in a small town,” said Camila, the name under which one of the sources hides.

The truth is that there is a division of opinion in the country between those who support the official policy against the “maras” and those who question it, arguing that it puts many innocent people in jail, although according to the residents of this municipality, in the east of the country, the MS-13 (Mara Salvatrucha), the Barrio 18-revolucionarios and Barrio 18-sureños gangs operate.

The residents know that the MS-13 has been practically reduced to six gang members who remain at large and those who operate are affiliated to Barrio 18, but they are hidden in the mangroves of the islands.

“Pupusa” has its day

“Pupusa” has its day