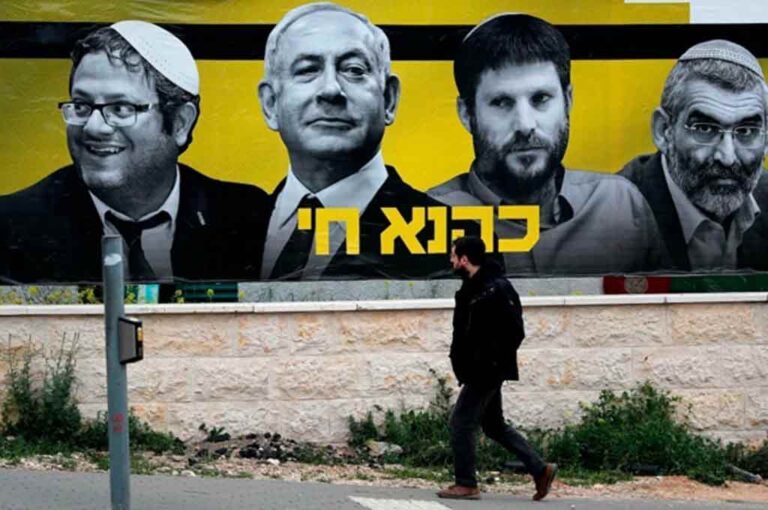 Cairo, Dec 5 (Prensa Latina) The establishment of Israel's next government, the most right-wing in the country's history, is stalled due to differences between Likud and Religious Zionism, amid deep regional concern over the anti-Arab and racist attitude of members of the ultra-nationalist alliance.

Although Likud was the most voted force in recent elections, winning 32 seats out of 120 in Parliament, it needs the 14 seats of its uncomfortable rival to rule as a majority along with the ultra-Orthodox Shas (11) and United Torah Judaism (seven).

This week both parties had a harsh exchange of words in the latest chapter of a dispute that has as its background control of the Defense Ministry, considered the crown jewel in the Israeli cabinet.

The Ministry is claimed by Bezalel Smotrich, the Religious Zionism top figure, but Likud leader and next Prime Minister, Benjamin Netanyahu, is resisting the step because of harsh international criticism against his ally due to his radical positions.

The Ministry’s functions include the approval of Jewish settlements in the West Bank and also rules the lives of millions of Palestinians there, a situation that Smotrich wants to use to reinforce Israel’s control over the area.

In fact, the national media revealed that Religious Zionism wants to force Netanyahu to commit to extending Israeli sovereignty over that Palestinian land, which runs counter to several UN Security Council resolutions on the issue.

In the past, Netanyahu, who ruled the country for 15 years, supported the measure, but then backed down due to international criticism and because of his negotiations to establish diplomatic relations with several Arab countries.

Concerning this, the Yediot Ahronoth daily revealed that the United States urged Netanyahu to appoint “someone who can be dealt with” for Defense.

According to a Channel 12 poll, 65 percent of Israelis reject Smotrich´s designation as Defense Minister, while 21 percent support the proposal.

Friction is also reported surrounding the Homeland Security Ministry, claimed by MP Itamar Ben Gvir, the top figure of Jewish Power (Otzma Yehudit), who closed ranks with Smotrich’s party. Accused more than 50 times and convicted eight times for rioting, vandalism, and inciting racism, Ben Gvir is known for having for years in his living room a picture of Baruch Goldstein, who assassinated 29 Palestinians in the Cave of Patriarchs in 1994.