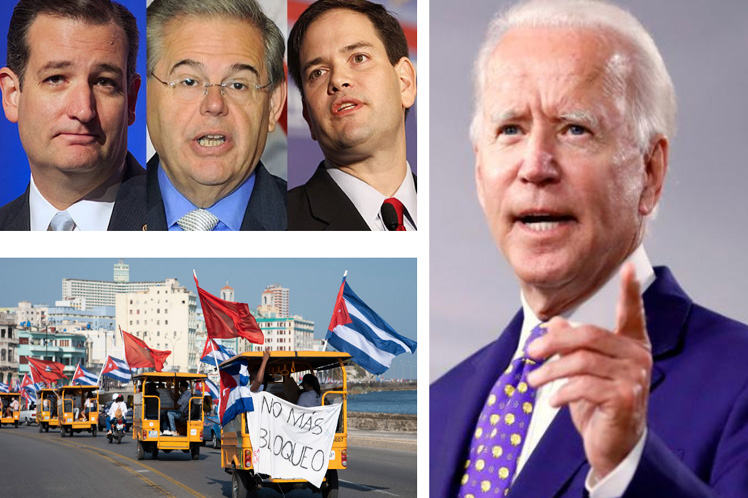 The White House gives few clues about how it will approach its policy with the Caribbean country, in a scenario where conflicting political considerations concur, among them those of a trio of Senate Republicans seeking that Biden does not eliminate Cuba from the list of state sponsors of terrorism.

Although he promised during his presidential campaign to fix ties with the largest of the Antilles, the president does not finish defining how he will approach the issue despite the fact that several Democrats advocate a more open policy, highlighting the potential benefits for the former adversaries of the Cold War, review The Hill. Some, like Geoff Thale, president of the Washington Office for Latin America, believe that in the rapprochement Americans can be the best ambassadors of all those values ​​that the Republicans use to maintain the blockade.

A change in policy toward Cuba is not currently among President Biden’s top priorities, White House press secretary Jen Psaki said in a briefing earlier this month.

However, for many legislators, time is of the essence, including Representative Jim McGovern (D-Massachusetts), who advocates a return to the actions begun during the Obama administration.

‘Let’s not make the mistake of moving slowly. We have to act now,’ the legislator said.

On the other hand, the opposition of Republican senators Ted Cruz (Texas) and Marcos Rubio (Florida) is joined by Robert Menéndez (Democrat of New Jersey), chairman of the Senate Foreign Relations Committee, who has been for a long time against any change in Washington’s tough stance toward Cuba.

Fulton Armstrong, professor at the American University and former director of Inter-American Affairs at the National Security Council (NSC), believes that the position of these legislators is why the Biden government cannot afford to wait to establish its policy towards Cuba.

The White House and its State Department must assume leadership and not leave policy towards Cuba in the hands of that sector. ‘If there’s one thing political junk dogs know how to do, it’s fill leadership gaps,’ he said.

‘Unilateral sanctions almost never work, and they have failed miserably in Cuba,’ Sen. Patrick Leahy (D-Vermont) said in a recent statement, blaming the Trump administration for rolling back Obama’s policies ‘to achieve the favor of Florida voters. ‘

The United States can actively engage or watch our competitors fill the gap, as they are already doing, Leahy warned.