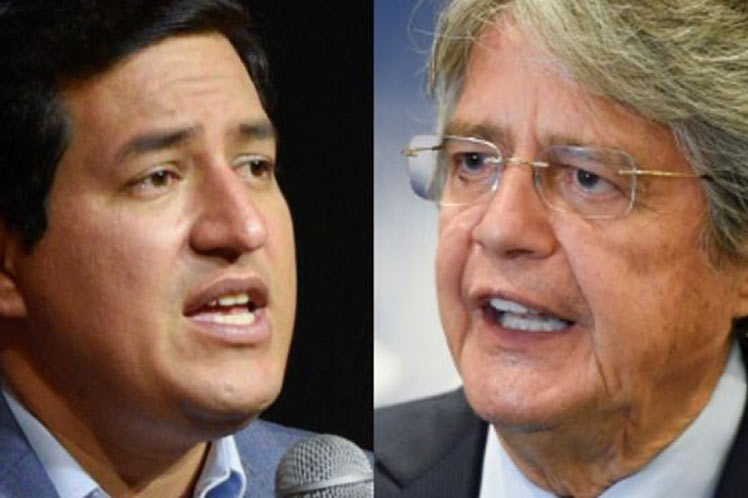 Quito (Prensa Latina) Ecuador is living the final days of the electoral campaign for the run-off of the presidential elections, on April 11, which will be disputed by Andrés Arauz and Carlos Rabascall, for the progressive coalition Union for Hope (UNES), and Guillermo Lasso-Alfredo Borrero, for the center-right alliance CREO-Social Christian Party.
Share on facebook
Share on twitter
Share on whatsapp
Share on telegram
Share on email

After the closing of the political campaign on Thursday, April 8, it will be time for voting, which will define the president and vice-president of the country until May 2025.

The director of the Law School of the International University of Ecuador and electoral analyst, Esteban Ron, affirmed that the country has a diversity of voters.

In his opinion, the runoff will take place after a first round, in which democratic stability, expressed through the institutionalism in electoral matters, was ‘quite diminished’.

In this sense, he explained that two of the presidential candidates (Guillermo Lasso and Yaku Perez) fought on the basis of an agreement with no legal basis, which ‘discredited too much the institutionality of the National Electoral Council (CNE)’.

Furthermore, he added that there were countless irregularities in the process of registration of candidacies, ‘some of them still in question before international institutions’.

The government plan of the Union for Hope seeks to recover democracy, the plurinational and intercultural State, dignity, work, a sustainable economic and productive structure and sovereignty towards the construction of the society of good living.

In order to have an impact on these sectors, the proposal includes decent work for all; opportunities for young people; free, universal and quality health and education; basic income, and greater access to social security coverage, as well as to functional housing in optimal conditions.

Reviving the economy with solid measures to stimulate it, and especially giving importance to the agricultural sector to ensure quality food and care for the environment, are also priorities.

For his part, Lasso’s agenda speaks of generating more jobs, reactivating the economy, improving health and education, among other promises.

But for many, they will not come to fruition because they identify this candidate as the protagonist of a co-government with the current president, Lenin Moreno, who distanced himself from the project with which he was elected and provided neoliberal measures, harmful to the lower income sectors.