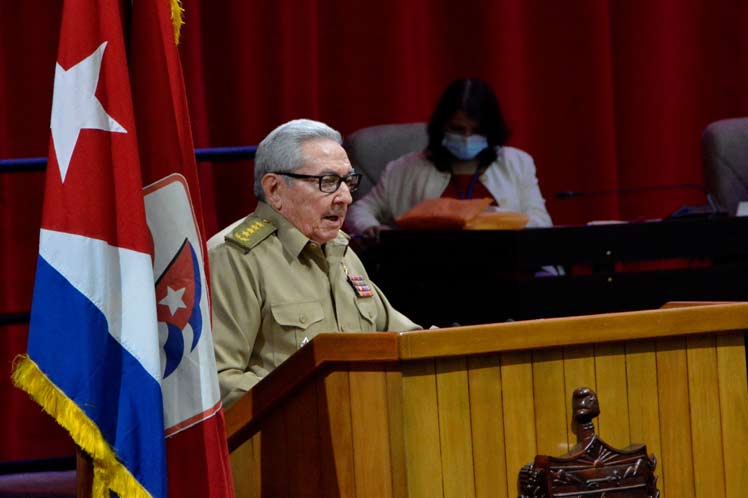 Raul Castro presented the Main Report at the opening session of the 8th PCC Congress, which is also attended by President Miguel Diaz-Canel, who is a member of the party’s Political Bureau.

He said that the United States is the biggest threat to world peace and security, and that explains the burden of the blockade imposed on his country for six decades.

The PCC first secretary noted that despite international rejection, that hostile policy harms Cuba’s economic relations with practically all nations of the world.

He pointed out that many governments lack the ability to implement their own rules with companies based on their territories. It happens when the banks in those countries prioritize Washington’s line before the government’s political stances, he added.

Raul Castro recalled that the Donald Trump administration intensified the blockade against Cuba amid the Covid-19 pandemic, showing the ‘ruthless nature of imperialism’.

Since 2017, that administration imposed more than 240 coercive measures with unprecedented methods that took the economic war against Cuba to the most aggressive levels as reflected in the people’s shortages, the party leader stressed.

He rejected the campaigns to deny the damage caused by the blockade, and pointed out that the White House enlarged a list that currently includes 231 Cuban institutions, many of which supply basic products to the population or operate in the hotel and financial sectors.

The intention is to sabotage Cuba’s entrepreneurial system, break the State’s management and promote chaos by strangling the country and causing a social outburst, he noted.

Raul Castro added that financial persecution is a real hunt of Cuban transactions, thus making foreign trade more expensive and complicating Cuba’s payments. At the same time, Cuba has to allocate huge resources to fight the pandemic and maintain hospitals and healthcare centers at higher costs due to the effects of the US blockade, he stated.

Raul Castro described as immoral the campaign against Cuba’s medical cooperation in other countries, which has saved lives and benefited millions of people.

Despite all these, Cuba is willing to engage in a civilized relationship with the US, if and when conditions are not set on its socialism or the right to exercise full sovereignty and independence, and to develop its own foreign policy.