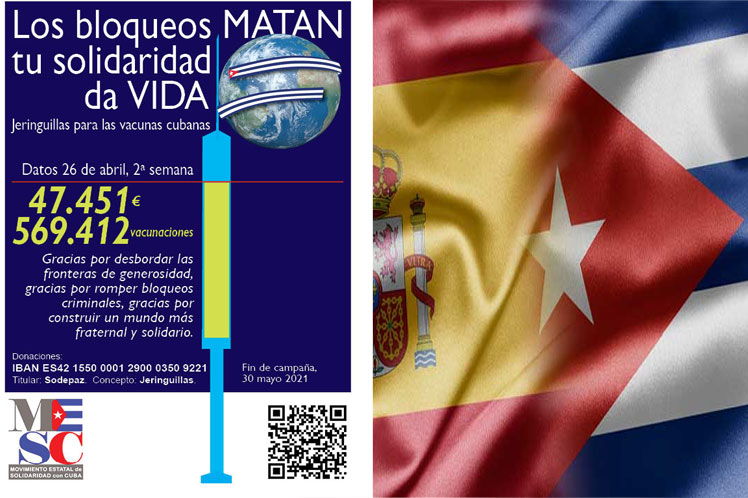 The sum collected so far is 90,134 euros, equivalent to 1,81,600 syringes, Paco Calderon, from Solidarity for Development and Peace (Sodepaz), told Prensa Latina. This way, the initiative exceeds one million syringes that were proposed to support Cuba in its efforts to immunize its entire population this year with its own vaccines against Covid-19, said the representative of the NG,O which is the driving force in Spain of the global campaign.

Under the slogan ‘The blockade kills, your solidarity saves lives’, the initiative promoted by Sodepaz is backed by more than 50 Spanish organizations in solidarity with the Caribbean island, associations of Cuban emigrants, political parties and trade unions.

For these groups, Cuba’s goal of inoculating all its inhabitants with its own vaccines is unprecedented among the Southern countries and a sign of resilience in the face of the US economic, financial and commercial blockade, which hinders the purchase of consumables.

Although Cuba has the vaccines produced by its biotechnology centers, it lacks other elements necessary for the immunization campaign, such as syringes or containers for the vials, the NGO pointed out in a communiqué.

These products are monopolized by a few companies, some of them from the United States, and due to the blockade they cannot be sold to Cuba, Sodepaz stressed.

This international initiative aims to raise funds in Europe to buy 10 million syringes.

The campaign is due to end on June 23, the day of the vote at the United Nations General Assembly on the draft resolution ‘Necessity of ending the US economic, commercial and financial blockade against Cuba’.