G7 entangled in promises and threats 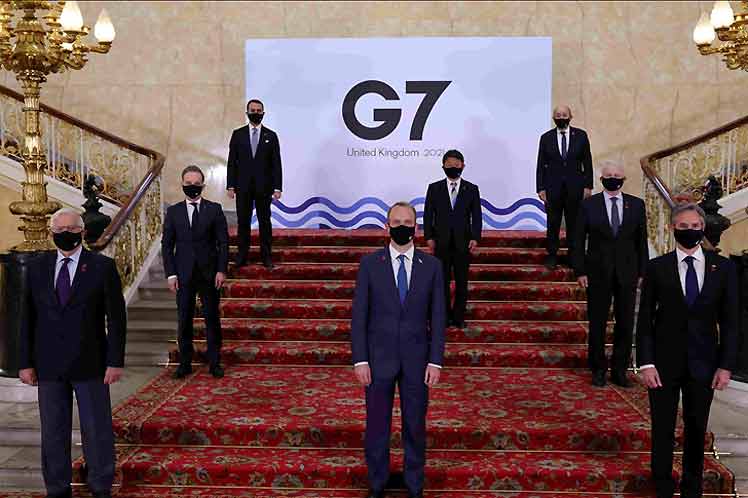 G7 entangled in promises and threats

The two-day meeting was attended by the foreign ministers of Canada, France, Germany, Italy, Japan, the United Kingdom, the United States in addition to representatives of Australia, South Korea, India and South Africa as guests, as evidence of the growing geopolitical influence of the Indo-Pacific region and the particular interest of London, host of the meeting, in fostering its post-Brexit relations with Southeast Asia.

At the conclusion of the event, which took place under strict health control measures to prevent the spread of SARS-CoV-2, participants agreed that an open, transparent and multilateral approach is needed to end the current pandemic.

The final declaration states, ‘We support the strengthening of health systems and equitable access to vaccines, treatment and diagnostics and will multiply our support to people in need.’

The text limits itself, however, to welcoming the G7’s earlier pledge of 10.7 billion dollars to the fight against Covid-19 and to urging its members to increase that financial support, although without offering specific figures.

‘We recognize the profound economic, social and political impact of the pandemic on vulnerable countries and populations,’ says the document, which instead devotes a good part of its 87 points to accusing China, Russia, Iran, North Korea and other nations of being a threat to the global order advocated by the seven Western powers.

Moscow, for example, was accused of alleged human rights violations, blamed for the volatile situation on the border with Ukraine and of seeking to destabilize the international system with cyber attacks and disinformation campaigns.

In the case of China, they brought up alleged abuses of civil liberties in Xinjiang, Tibet and Hong Kong, intellectual property and practices that undermine ‘free and fair economic systems.’

Despite the criticism, the G7, which also called on the Democratic People’s Republic of Korea to refrain from provocations and to resume diplomatic channels with the explicit goal of achieving its denuclearization, spoke out for maintaining a stable relationship with Russia and cooperating with Beijing in combating climate change and addressing other global challenges.

‘We pledge to work together and with our friendly countries and the multilateral system, in shaping a safer, cleaner, freer and fairer future for the planet,’ the foreign ministers announced.

The scenario in Libya, Myanmar, Syria, Ethiopia and climate change also occupied spaces in the discussions, which served as a prelude to the summit of heads of state and government of the seven powers scheduled to take place in June, in the English region of Cornwall.