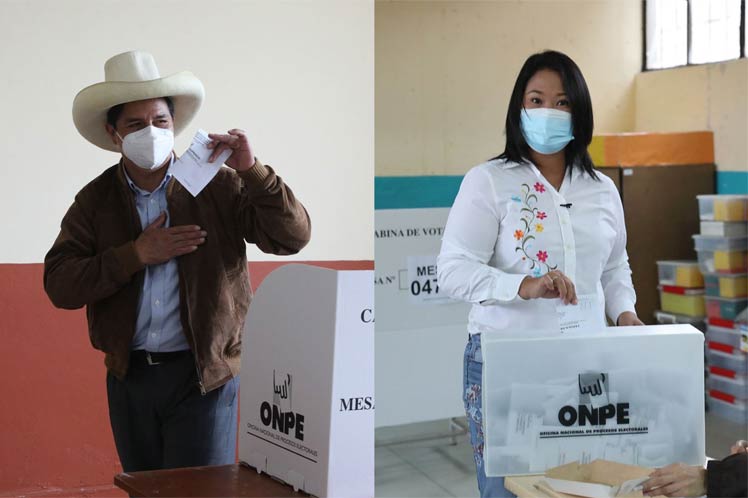 Ipsos company counting consisting of a sample of electoral records, showed 50.2 percent for Castillo and 49.8 for Fujimore with a margin of error of 1 percent, so, no defined winner so far, according to company´s director Alfredo Torres.

A previous counting at polls, among electors just coming out, Ipsos pointed at Fujimore with 50.3 percent and 49.7 for the other.

Results of the new polling brought joy to Castillo´s supporters marching in Lima and center-andean city of Ayacucho, they demmanded respect for the popular´s will and those gathered in north-andean municipality of Tacabamba where this candidate still prevails.

After this poll, atention was focused on the official results which the oposition pledged to wait for and respect through brief and cautious speeches as well as ask population to remain calm.

Juan Carlos Tafur, neoliberal analyst, considered Castillo´s triumph was certain since the poll still did not include the vote from countryside population who are in favor of the rural teacher, vote of the emigrated is also included, he stated.

Chief of Electoral Processes National Office(EPNO) Piero Corvetto explained results will be known progressively in the following days, first from urban areas, then those from further regions and finally those from the emigrated.

Political party Perú Libre, after Castillo´s call for peaceful defense of vote on the streets, demmanded Chief of EPNO, Piero Corvetto, copies of all electoral records to check the final poll and the presence of the Crime Prevention attorney.