Mexico highlights accusation against US by President of Cuba 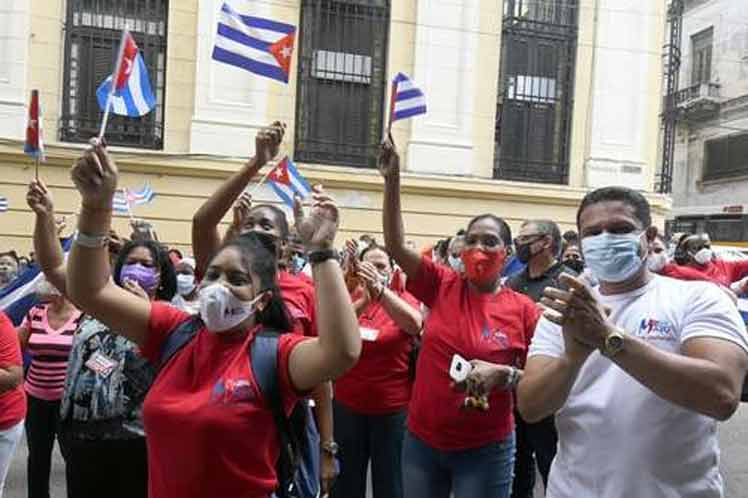 Mexico highlights accusation against US by President of Cuba

The newspaper offers a broad version of the appearance Monday of the Cuban president, who affirmed that he defends peace and not violence.

We do not encourage a civil war, as some have wanted to show in headlines. What we have is the will, the conviction and the legitimate duty to defend the revolutionary work against those who try to undermine it by following an annexation plan, of vandalism, violence and aggression, even inciting the killing of people.

La Jornada indicates that it was an appearance on all the national media, together with members of his team, in which the Cuban president recalled that in 2019, as the US blockade intensified during Donald Trump’s government, it was explained to the population that a period of difficulties would entail.

He reported that in recent weeks the campaign on social networks against the Cuban Revolution has increased, raising a group of platforms around the problems and shortages that we are experiencing.

This is the way it is orchestrated, he denounced, trying to create discontent and dissatisfaction that reaches protest level from manipulating emotions and feelings in social networks about the problems the population is facing.

‘The blockade has limited us from acquiring raw materials with which we produce drugs’, he underlined, and recognized that ‘it is legitimate that we have dissatisfaction, but we also have to be able to visualize and define well where they want to manipulate and separate us.’

When rejecting that his call to defend the revolution is for confrontation, he added that he observed those who participated in the protests, and said that ‘not all are counterrevolutionaries.’

‘Isn’t it a very hypocritical and cynical speech that you, who block me, who carry out the policy that violates the human rights of an entire population for more than 60 years and worsens it amid a situation as complex as the pandemic, then, want to present yourself as the great savior?

Lift the blockade on Cuba, lift the 243 measures (imposed by Trump) and we’ll see how we play, we will see what this people is capable of doing, which has done an immense social work subject almost to a war economy due to these measures, the newspaper quotes.