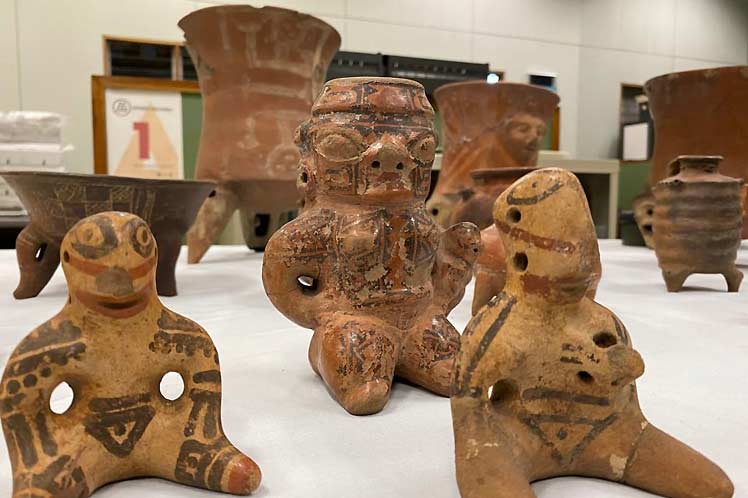 San José, (Prensa Latina) Costa Rica has only been able to recover 2,286 archaeological pieces from different indigenous cultures of the little more than 16,000 taken to the United States by American business executive Minor Keith, builder of the railroad in the Central America and the Caribbean.
Share on facebook
Share on twitter
Share on whatsapp
Share on telegram
Share on email

According to the book Keith and Costa Rica, by the North American writer Watt Stewart, the business executive’s interest in collecting indigenous art arouse from a fortunate accident.

Among the many plantations he owned in the region was one named Mercedes, located in the valley of the Santa Clara River, a tributary of the Reventazón, which flowed down from the north.

The author tells that one night that site was hit by a small hurricane, which uprooted a gigantic tree that grew near the camp. When the next morning the workers were engaged in observing the damage, one of them caught the glint of gold from an object, embedded in the solid mass of earth that lay between the roots of the fallen plant.

‘Thus, with the discovery of the treasures of the Mercedes, Keith entered his archaeological and anthropological phase’, indicates the writer, until forming the collection that bears his name with more than 16,000 pieces, undoubtedly the largest of primitive Tico art and taken to the United States between the end of the XIX century and the beginning of the XX century.

After the tycoon’s death in 1929, his wife gave some objects to the Brooklyn Museum, while others were purchased in 1934.

Recently, the Costa Rican National Museum showed 1,305 repatriated pre-Columbian pieces in the second and last batch from the Brooklyn Museum, with which it now has 2,286 from the Keith Collection under its tutelage.

The first delivery dates back to 2011, when 981 items were returned. Among the ceramic and stone objects are a medium-sized tombstone, vessels, vases and domestic utensils, carvings and sculptures from the south, metates from Guanacaste and sukias from the Atlantic.

Archaeologist Leidy Bonilla, from the Department of Cultural Heritage Protection, said that these pieces will help to fill certain gaps, especially in ceramic typology, as well as in lithic instruments and figures.