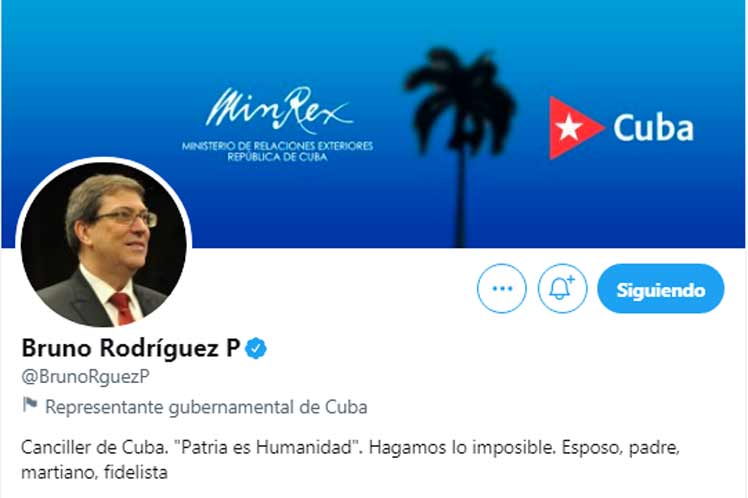 In a message on Twitter, the foreign minister noted how the United States also lacks reasons to enforce coercive measures of economic suffocation against the Cuban people amid the Covid-19 pandemic.

There is also no justification for keeping the economic, commercial and financial blockade imposed by Washington for almost six decades, he said.

According to Cuban authorities, the island nation is the target of simultaneous warfare: media, symbolic, economic, political, all connected by the technological revolution, which encourages violence in digital spaces and spreads fake news on a global scale to distort the reality and stimulate destabilization.

Rodriguez recently accused the United States Government of being directly involved in riots that occurred in Cuba on July 11.

Havana also condemned the persistence of the blockade, intensified by 243 measures adopted during Donald Trump administration (2017-2021), 55 of which in the context of the pandemic.

These days, more than 400 artists, politicians, intellectuals and activists from around the world sent a letter to US President Joe Biden, asking for the end to the blockade and the unilateral coercive provisions against Cuba.

The text, published in The New York Times, is an ‘urgent public call’ to undo the ‘cruel policies’ implemented by the Trump administration, and urges the current occupant of the White House to resume the normalization of relations between Washington and Havana.

In recent days, the Tricontinental Institute for Social Research presented the online exhibition entitled Let Cuba Live, in which 80 artists from 19 countries presented more than 100 works in defense of the Cuban Revolution.

Added to this is the solidarity of nations like Russia, Mexico, Bolivia and Nicaragua, which, amid the difficult context due to hostility from the United States and the impact of Covid-19, have sent food, hospital supplies and medicines to the island.

In addition, Vietnamese Prime Minister Pham Minh Chinh on Thursday made a symbolic delivery of a donation of 12,000 tons of rice to Cuban Ambassador in Hanoi Orlando Hernandez.