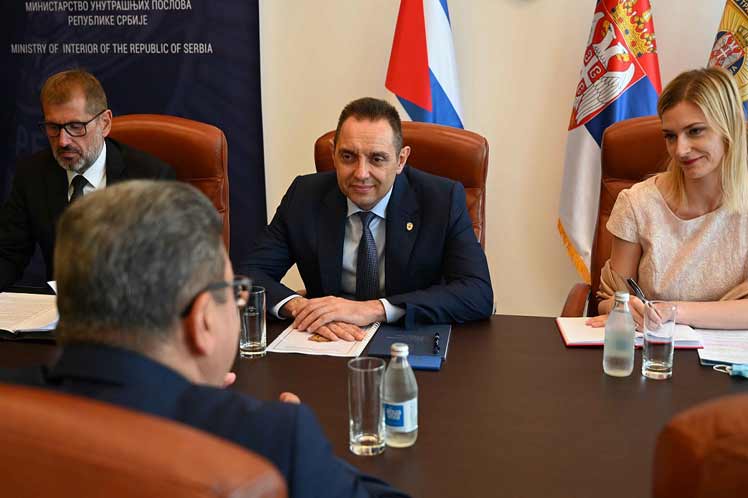 The minister reiterated his country’s stance at a meeting with Cuban Ambassador to Serbia Gustavo Trista del Todo, during a hearing held at the Ministry’s headquarters.

Vulin, who is also the president of Movement of Socialists, praised the state of traditional friendly relations between the two countries, while calling Cuba a sincere ally.

He thanked Havana for its support for Serbia’s territorial integrity and sovereignty, and for the non-recognition of Kosovo province as an independent State.

Vulin also highlighted the recent overwhelming approval, for 28 consecutive years, of the resolution against US blockade at United Nations General Assembly.

For his part, the Cuban diplomat updated the minister on the latest events in his country, in particular the decision by the people and authorities to defend the Revolution against threats from internal and external enemies.

Trista del Todo reported on the current health situation due to Covid19 and, especially, the authorization for the emergency use of the Abdala vaccine, the development of four other candidates and the mass immunization program.

Vulin emphasized that these achievements are due to the excellence of Cuban medicine, which has earning worldwide prestige, and that explains such outstanding results by a small nation.

The Movements of Socialists is part of the government coalition with the Progressive Party of Serbia, headed by President Aleksandar Vucic, along with the current minister of the Interior, who previously held the Defense and Labor ministries.