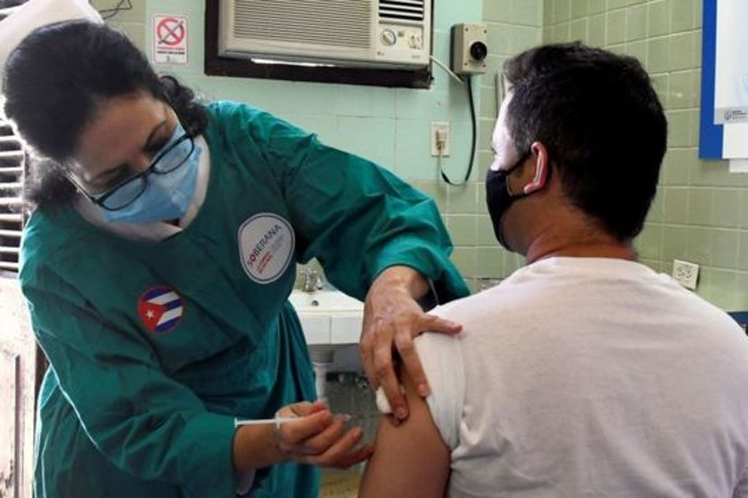 According to the latest report published by the institution, four million 705,104 people received a first dose of one of the immunizers, which represents 42 percent of the Cuban population, a high number compared to the world’s 30.7 percent.

With a second dose already administered there are three million 389 thousand 339 people on the island, and with complete vaccination plan in three doses the figure reaches two million 898 thousand 39, which represents 25.9 percent of national population .

Such pattern once again outdoes the world, since the global percentage of people fully vaccinated is 16.

Cuba has three anti-Covid-19 vaccination schemes exceeding criteria imposed by the World Health Organization (50 percent efficacy) to be declared vaccines and one of them, Abdala, has already received authorization for emergency use on the island.

Produced by the Center for Genetic Engineering and Biotechnology (CGEB), its immunization scheme consists of three injections and in phase III trials it proved 92.28 percent efficacy, and 100 percent against severity and death.

As for candidate Soberana 02, designed by Finlay Vaccine Institute (FVI), also used for the immunization of the population, along with Soberana PLUS, from the same center, showed 91.2 percent efficacy in phase III trials.

In addition, such two-dose Soberana 02 scheme plus one of Soberana PLUS also proved 100 percent efficacy against severity and death.

Cuba has other anti-Covid-19 projects: Soberana 01 from FVI and Mambisa from CGIB, the latter being a nasal-administered formulation that is already authorized by the regulatory entity for its phase I / II clinical trial in 120 convalescent volunteers, along with Abdala vaccine.