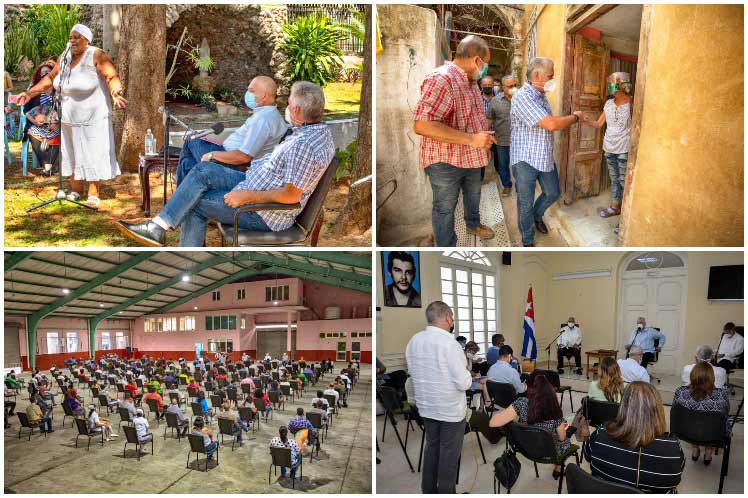 This week, President of the Republic, Miguel Díaz-Canel, followed up on meetings with citizens to jointly seek solutions to problems present in the Caribbean nation, with emphasis on serving the most vulnerable people.

In this regard, he exchanged with specialists and young jurists, to evaluate proposals for participation in the regulations of organizations, as well as the advisory and training processes for workers in the sphere.

The president also went to the Havana neighborhood of San Isidro, where he interacted with residents and community leaders, including representatives of religious institutions and local projects.

Similarly, he met with women from various sectors, whom he called to promote public policies and rescue social programs implemented by the Revolution.

The day before, Díaz-Canel recognized the work of students of Medical Sciences in the fight against the pandemic, as part of a meeting with 95 future health professionals.

Last Monday, the president pointed out that this week would be decisive to reverse the incidence rate of Covid-19 and the epidemiological situation in the Caribbean nation, in a context in which health authorities foresee a complex month of August.

According to forecasting models, Cuba will maintain high numbers of confirmed patients with the disease in the coming weeks, above 7,500 cases, until reaching a more favorable scenario in mid-September.

‘There are signs that we can gradually improve the situation, but it is necessary to complement, support, and sustain the result of the vaccination with an appropriate conduct on the part of all,’ insisted the head of state at a government meeting to control the Covid -19.

Also, the day before Cuba and the world paid tribute to the historical leader of the Revolution, Fidel Castro, on occasion of his 95th birth anniversary of who is considered one of the main figures of the 20th century.

On Friday, the president led a virtual forum in remembrance of the statesman, in which intellectuals, politicians and scientists praised the coherence of thought, the strategic vision and the solidarity vocation of Fidel Castro.

Also this week, authorities of the Caribbean nation described as opportunistic the new measures that Washington imposed against two officials of the Ministry of the Interior and the Prevention Troops of the Revolutionary Armed Forces, condemning the destabilization campaigns designed by the United States against the island..