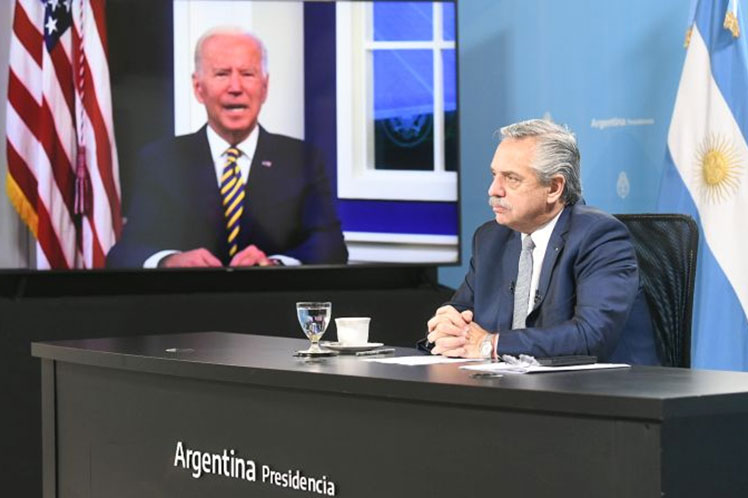 In his speech at the Forum of Main Economies on Energy and Climate, summoned by the United States, the president noted that a Covid-19, climate change and debt triple crisis is hitting hard middle-income countries like Argentina.

He insisted on urgently rethinking an international financial design which includes the capitalization of Development Banks and the exchange of debt for climate.

‘Either we globalize solidarity or indifference,’ the president said in his speech, after noting that it as essential that climate and energy transition be fair and not further broaden well-being gaps on the planet.

Fernandez referred to the case of Argentina, and recalled that the resources approved in 2018 by the International Monetary Fund totaled 57 billion dollars, equivalent to all the money disbursed by that institution in the year of the pandemic to 85 nations of the world.

This makes it an unsustainable debt, he said, after explaining that the possibility of eliminating surcharges and extending payment terms is essential for Argentina, under the current circumstances of health, financial and ecological stress.

On the other hand, he recalled that his nation decided to raise its climate standards and commit to carbon neutrality by 2050 even in the middle of a debt situation, which is unprecedented worldwide, and warned that a generalized debt crisis would only aggravate environmental degradation.

The Forum was attended by representatives of Australia, Bangladesh, Italy, Japan, the United Kingdom, Indonesia, Mexico, among other nations, in addition to executives from the European Commission, Ursula Von der Leyen, and the European Council, Charles Michel; and United Nations Secretary General Antonio Guterres.