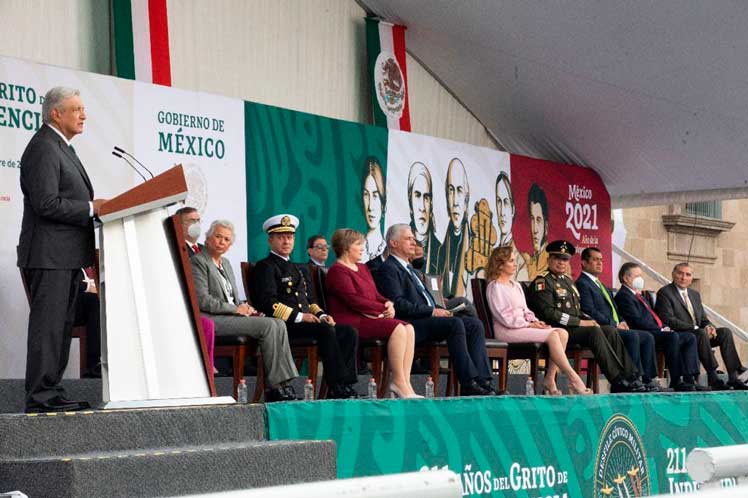 ‘The speech of @lopezobrador in ceremony for the 211th anniversary of the Grito de Dolores, to all Cubans who were there, reached the bottom of our hearts,’ he added through his Twitter account.

Diaz-Canel, on an official visit to Mexico, highlighted excerpts from the words of the Mexican head of state, who once again rejected the imposition of unilateral measures against Cuba and called for an end to the US economic, commercial and financial blockade.

Lopez Obrador reiterated the day before that the Antillean nation represents a people that has known how to be faithful to its historical continuity and assert its right to live free, without allowing interference from any foreign power, like few others in the world.

For its struggle in defense of sovereignty, the Cuban people deserve the prize of dignity and the island should be recognized as the new Numantia for its example of resistance, and I think that for that very reason it should be declared a world heritage site, he said.

The Cuban president, who also gave a speech before the civic-military ceremony, assured that this invitation to Mexico ‘has an immeasurably greater value at a time when we are suffering the onslaught of a multidimensional war’.

Through his social network, Diaz-Canel also highlighted the ’emotional meeting with the Mexican solidarity movement with Cuba’, as well as the dialogue with solidarity friends of the Aztec nation. As part of the agenda, the Cuban leader will attend the VI Summit of the Community of Latin American and Caribbean States, which has among its main topics the fight against Covid-19.