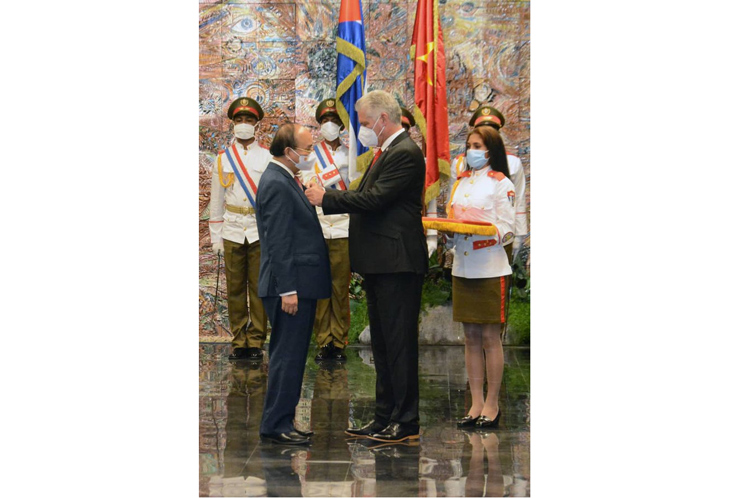 The Cuban president highlighted on Twitter the granting of the highest distinction of the Caribbean nation to the leader of the Asian country, whom he considered a close friend of Cuba.

Díaz-Canel also underlined the example represented by Vietnam, a state that he considered an inspiration for Cubans at all times.

Yesterday, President Nguyen Xuan Phuc received the order bearing the name of the National Hero of Cuba, in recognition to his contribution to strengthening the historical ties of brotherhood between the two peoples.

Minister of Foreign Trade and Investment, Rodrigo Malmierca, in words during the ceremony, also referred to the humble origins of the Vietnamese president, who from an early age joined the revolutionary struggle and the membership of the Communist Party in his country.

In a special way, he made reference to the Vietnamese president’s contribution to the promotion of close relations between the two nations and his permanent defense of the Caribbean island against the economic, commercial and financial blockade of the United States.

Nguyen Xuan Phuc said he felt a great honor and emotion upon receiving the José Martí Order, and on behalf of his country expressed sincere and deep gratitude for the feelings and recognition of Vietnamese efforts to strengthen the historical ties of friendship. He recalled that Cuba was the first state in the Western Hemisphere to establish full relations with the Asian nation, and commented that since the beginning of the bond forged by leaders Fidel Castro and Ho Chi Minh, many generations have devoted their work to enriching that brotherhood.

For this reason, he shared the hommage with all those who in six decades of bilateral relations fostered solidarity, mutual support, cooperation and the prosperous development of both countries.

In addition, he ratified the will to maintain the transparent and model ties that unite the two peoples, governments and communist parties, proven throughout history.

The President of Vietnam is in an official visit to Cuba since Saturday, during which he has held meetings with the highest officials of the State and Government.

As part of it, several agreements were signed in areas like health, biotechnology, justice, food production and academic exchange, among others.