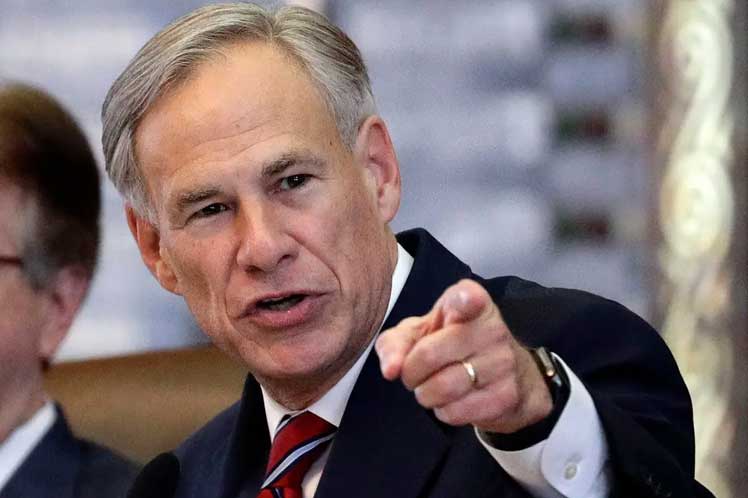 Washington, Sep 27 (Prensa Latina) The Governor of Texas Greg Abbott described as necessary the methods used by Border Patrol agents against Haitian migrants, a different message from the one that Joe Biden's administration is trying to transmit today.

Far from condemning the abuses against the migrants, which have been reported in the media, the Republican justified the border guards during his appearance on a Sunday Fox News program.

He said that such actions were necessary because the Biden administration was failing in one of its most basic constitutional duties: ‘to secure the sovereignty of the United States of America.’

If any agents lose their jobs, he will have another one waiting for them. ‘I will hire them to help Texas secure our border,’ he emphasized.

Between September 9 and 24, some 30,000 migrants from Haiti attempted to enter the country and in a makeshift camp under the International Bridge in that city, about 15,000 gathered a week ago, The Washington Post reported.

On Friday, the Secretary of the Department of Homeland Security (DHS), Alejandro Mayorkas, announced that all the migrants had been removed from the camp after a process of expulsions, much criticized not only by Republicans but also by Democrats.

Of the total number of Haitians, some 12,400 were allowed applying for asylum or some other form of humanitarian protection. Many of them had been living in South America for over a decade, since the 2010 earthquake devastated their country.

However, the Biden administration expelled thousands more to Haiti without allowing them to make their case for asylum, a controversial policy of the Donald Trump era (2017-2021).

Known as Title 42, the measure empowered federal officials to quickly expel migrants from the United States during the Covid-19 pandemic, circumventing the legal process to apply for asylum.

Critics allege that the Biden administration, which promised a more humane approach to immigration than the Trump administration, is continuing enforcement of such a provision.

The White House’s Press Secretary Jen Psaki called the video footage ‘horrific,’ Biden expressed that ‘those people will pay’ and DHS officials opened an investigation into what happened.

However, during the Fox News programme, when the governor was asked if he was concerned about the footage, he said he was not.

Federal agents ‘would not have been in that situation if the Biden administration enforced immigration laws and secured the border in the first place,’ he underscored.