UN calls for an end to the US blockade against Cuba 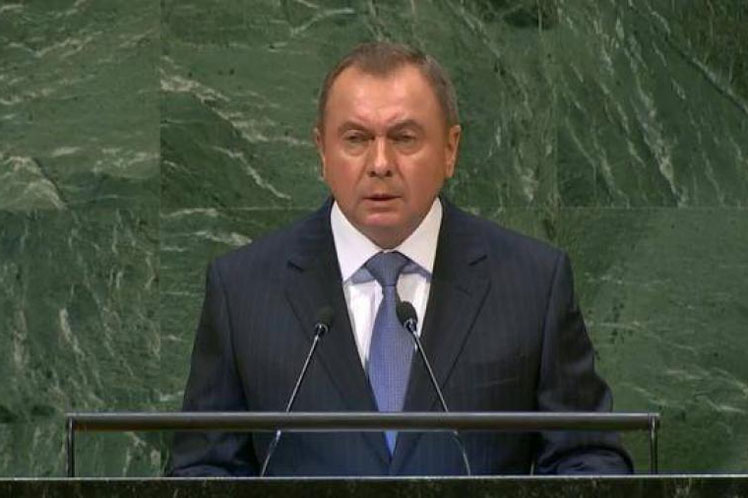 UN calls for an end to the US blockade against Cuba

During his speech to the plenary, Belarus’ Minister of Foreign Affairs Vladimir Makey reiterated his country’s support ‘for the sisterly nation and people of Cuba who have been living under an unfair economic blockade for so many years now, due to a single State.’

As the UN special rapporteur on the negative impact of unilateral coercive measures on the enjoyment of human rights said, ‘Sanctions are bringing suffering and death in countries such as Cuba, Iran, Sudan, Syria, Venezuela and Yemen,’ he noted.

Grenada’s Minister of Foreign Affairs Oliver Joseph also joined in the 76th session of the UN General Assembly in calling for an end to the US blockade.

Every year, the FM recalled, Grenada reiterates how counterproductive the blockade imposed by the United States against Cuba is, and the inhuman socio-economic difficulties it imposes on the people of that island, a country that has provided immense humanitarian assistance to many, including in this period of the Covid-19 pandemic.

However, that Caribbean nation is hampered in its full participation in the global economy by the US mechanism, he underscored.

Joseph thanked Cuba for its solidarity and valuable contributions and support to Grenada, the entire region and the world in the fight against the pandemic and many other areas.

Grenada votes annually with the overwhelming majority of the UN General Assembly in favor of resolutions calling for the removal of the US blockade.

Once again, he added, we call for the lifting of the blockade, respect for the rights of Cubans and the readmission of that country, without obstacles, into the financial, economic and commercial community of nations.

Washington tightened the blockade in an opportunistic and unprecedented manner in the context of the Covid-19 pandemic, as the Government of Havana has repeatedly denounced.

Under the mandate of Donald Trump (2017-2021), the White House launched over 240 unilateral coercive measures and sanctions against Cuba. Up to date, Joe Biden’s administration fully implements the same policy.