Argentina remembers Quino one year after his death 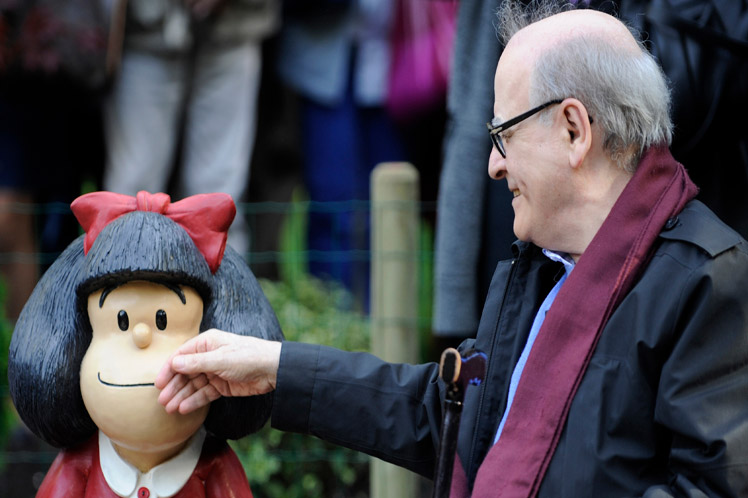 Argentina remembers Quino one year after his death

Buenos Aires, Sep 30 (Prensa Latina) A year after his death, Argentineans are on Thursday remembering one of their most brilliant artists, the cartoonist Joaquín Lavado (Quino), with multiple tributes, but above all, revisiting his work.

Twelve months have passed since that sad news, one of the most painful in this country in the terrible year 2020, when many remained at home locked up because of the Covid-19, which shook Argentina with force and Argentina dressed in mourning for Mafalda’s father, who died just one day after his most popular character turned 56 years old.

To commemorate the cartoonist and graphic humorist, this Thursday there will be a ceremony in his native Mendoza, where the local headquarters of Radio Nacional was renamed LRA6 Mendoza Quino, but also on this day new anthologies will be released and exhibitions on his work will be inaugurated.

In addition to the various tributes in the province of Mendoza, the Tecnópolis exhibition center will reopen next Saturday after being closed due to the health situation, precisely with the exhibition Las máquinas de Quino (Quino’s Machines), based on the ones the creator drew in his comic strips.

With upcoming projects such as the publication of The Philosophy of Mafalda and the translation of Quino’s complete work in Portuguese, tributes are also felt outside the country.

In Italy, a new edition of the book All the strips was released, while a postage stamp of Mafalda was issued for her 57th birthday.

In addition, since September 3 and until October 30, the exhibition Para sempre, Quino (Forever, Quino) is on display at the Metro, Trianon-Masp station, in the city of Sao Paulo, Brazil. On Twitter, prominent personalities remember the master. In the official account dedicated to Mafalda today a video was shared as a tribute to his life and career, on the first anniversary of his departure. ‘For your wit and your peculiar look at reality. For making children and adults around the world laugh and think. Thank you Master’, can be read from that account.

The Ministry of Culture also paid tribute to ‘the endearing character of Joaquín Salvador Lavado, better known as Quino’, while the media site La Garganta Poderosa pointed out that while his legacy lives on, he will never stop drawing.