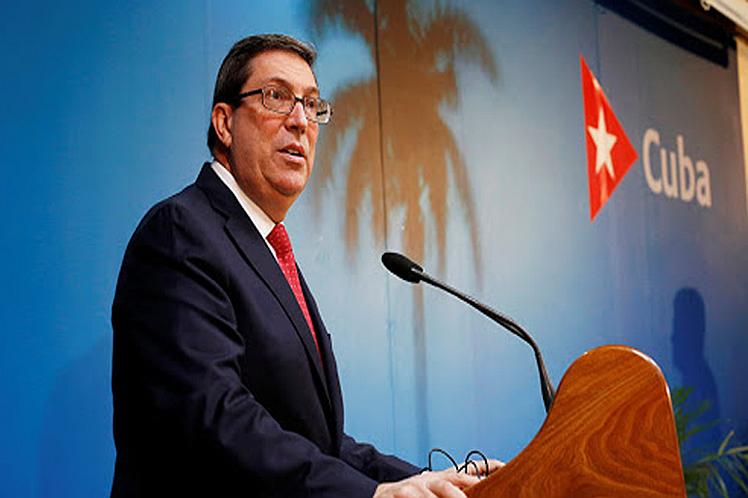 In an interview on the US television network NBC, Rodriguez affirmed that despite Washington’s hostility, the Cuban Government remains willing to resume the path of dialogue biased by Trump after he took office.

President Joe Biden’s decision to maintain his predecessor’s sanctions against Cuba may be the result of inertia, and it is regrettable that he is not able to implement his own policy on Cuba, Rodriguez said.

It is a terrible mistake to enforce these kinds of sanctions, especially in the context of the global health crisis, where all countries are struggling to contain contagions and solidarity is an imperative, the head of Cuban diplomacy stressed.

The Cuban foreign minister accused the Biden administration of neglecting the Caribbean and Latin America, and noted that he was hopeful that the United States could review its policies on Cuba.

I hope that due to the nature of this government, a positive step can be expected, added Rodriguez, who recalled that the occupant of the White House was vice president during the Barack Obama administration (2008-2017).

The Obama-era policies eased restrictions on travels and trade with Cuba, and demonstrated that the two countries could have a less contentious relationship, Rodriguez added.

The years 2015 and 2016 prove that it is possible to move towards a path of understanding, despite the deep political differences between our governments, he commented.

In 2017, the Trump administration reversed Obama’s detente with Cuba and imposed 243 trade, travel and financial restrictions, and included Cuba again in the list of state sponsors of terrorism.

Trump also reduced the staff of the Embassy of the United States in Havana and closed its consular services under the excuse that Cuba had used supersonic weapons against the diplomats, something ruled out by Cuban and international experts.

Rodriguez encouraged President Biden to reestablish consular services and allow his officials to return to the embassy in Havana.

During the interview, the foreign minister praised the achievements made by Cuban scientists during this year of the Covid-19 pandemic, such as the creation of its own vaccines that will immunize 90 percent of its population in record time.

When asked about the riots that occurred in Cuba on July 11, the foreign minister explained that many of the protesters were manipulated by groups from Florida, which spread erroneous information on the Internet to encourage opposition to the government.

He added that the country’s economic conditions are very difficult for Cubans, but they are the result of the effects of the pandemic caused by the SARS-CoV-2 coronavirus, which causes Covid-19, and the United States sanctions imposed with the only goal of suffocating the people.