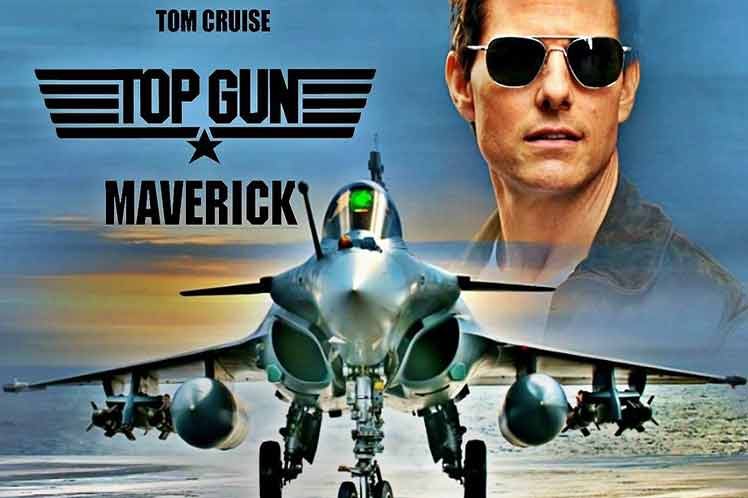 Havana, (Prensa Latina) 35 years after the ticket box success of Top Gun (1986) took him to the top as one of Hollywood's stars; Tom Cruise will again play the role of Maveric in the second part of the film, which should be premiered on May 27, 2022, after being postponed several times due to the Covid-19 pandemic.
Share on facebook
Share on twitter
Share on whatsapp
Share on telegram
Share on email

This sequel, whose story will take place three decades after that of the original movie, the pilot played by Cruise will work as a captain and flight instructor at the Top Gun Fighter Weapons School in California, and will have among its students the son of Goose, Maverick’s former partner who died in an accident.

After some delays, the film was scheduled to get to movie theaters in November, but the Paramount Pictures production company announced early this month that the feature length movie won’t be release until next year.

In this way, those who want to know if the 1986 film’s success can be repeated will continue waiting, a movie that was not a work of art, let alone a great film, but was able to lure an important number of people in the audiencethanks to elements, such as the protagonist’s charisma and spectacular air scenes.

There are still some months to go to get to know, then, if Top Gun will join the list of second parts which have been able to match or to get close to the success of the previous ones, or if it will increase the long charts of those which failed.

‘The murder of El Padrido II line has been disappointed by it,’ Joaquín Sabina andFitoPáez say in a song, but beyond the opinion by singer-songwriters about thecharacter, the truth is that the feature length movie that gave continuity to the Corleone family story (1974) seduced and pleased audiences and critics alike to the extent that it’s considered one of the best sequels in film history. Star Wars: Episode V -The Empire Strikes Back (1980), Mad Max 2 (1981), Indiana Jones and the Temple of Doom (1984), Aliens: The Return (1986), Terminator 2: Judgment Day (1991), Toy Story 2 (1999) and The Lord of the Rings: The Two Towers (2002) are other productions considered worthy successors to the original films.

In the opposite direction, other movies, such as Return to the Blue Lagoon (1991), Sister Act 2, Major League 2 (1994) and Son of the Mask (2002) were a fiasco, with very poor audience acceptance and negative reviews.

Many second parts haven’t put an end to the first stories, but made up more extensive film series, in some cases, excessively long, with a large number of movies with an unequal quality.

For example, the premiere of the second part of Mission Impossible is set for next year, in which Cruise himself, now 59 years old, will again play his role as Ethan Hunt, and another film of that kind is expected for 2023.

Sequels have a lot to do with an interest in achieving high ticket box revenues, since they are aimed at luring a nostalgic audience willing to again watch their favorite characters, although they have considerably aged and the world where they emerged has gone through remarkable changes.