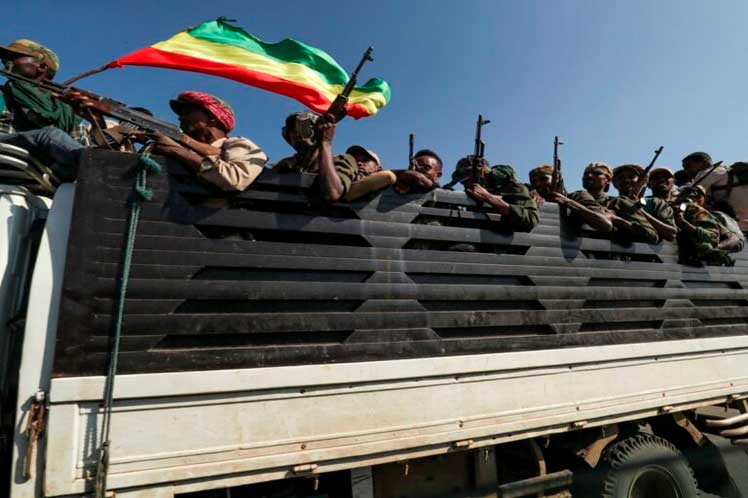 During the debate, Parliamentarians agreed on the need to pass the measure due to, they pointed out, the seriousness of crimes perpetrated by the forces of the Tigray Popular Liberation Front (TPLF) and its affiliates in various parts of the country.

Earlier this week the government decreed a state of emergency to protect citizens from the TPLF and keep the integrity of the nation, according to Minister of Justice, Gedewon Temotiwos, at a press conference.

For his part, Prime Minister Abiy Ahmed expressed in a message to the people that the purpose is to quickly solve the unstable situation in the northern part of the country.

“We must overcome the circumstances, we have to lead our lives in accordance with reality so that our problems can be solved soon”, Ahmed said.

Regarding the decision, adopted after an extraordinary meeting of the Council of Ministers, any person suspected of having a close relationship with members of the TPLF can be detained without an arrest warrant.

Also, among many other actions, security forces may carry out random raids and confiscate unregistered weapons, while any publication will be prohibited if its text shows any moral support for the organization.

For some observers, the alliance of the TPLF with the Oromo Liberation Front, considered a radical and influential opposition group, determined the government’s implementing of the emergency.

Others point out as main factor the danger that troops of that organization advance towards the capital after the statement of the TPLF spokesman, Getachew Reda, who assured the group had taken over Kombolcha and Dessie, strategic cities of regional state of Amhara.

Federal authorities acknowledged the attempt to enter Dessie and other places, but assured invaders did not control any public institution and towns remain in the hands of Ethiopian security.

On the night of November 3, 2020, the TPLF attacked the northern command of the National Defense Forces and, in response, the following morning deployment of troops to restore constitutional order was instructed.

In less than 30 days the federal army entered Mekele, the capital of the region, but leaders and members of the group fled and began a process of reorganization in neighboring areas.

The Front took advantage of the armistice decreed last June by the government to return to the territory and, furthermore, extended its belligerence to the Afar and Amhara regions.