Visit of Cuban President in 2018 remembered in the DPRK 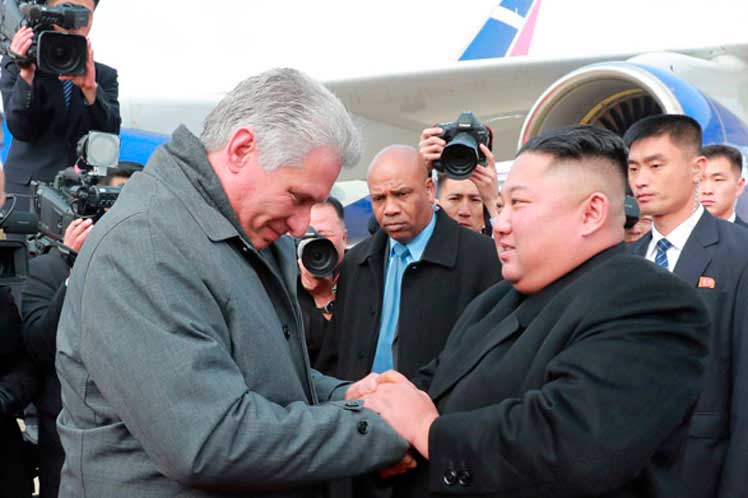 Visit of Cuban President in 2018 remembered in the DPRK

In the edition this Thursday, the newspaper included an article on the third anniversary of Díaz-Canel’s meeting with North Korean leader Kim Jong Un, and noted they held conversations filled with sentiments of friendship.

Likewise, the note recalled leaders of the two countries promised to move forward on the road to victory in the construction of socialism.

The summit allowed to continue and develop the fraternal and traditional relations of friendship and to firmly consolidate the fighting solidarity between the two parties and peoples struggling for a common cause, it added.

On the other hand, it was recalled that thanks to the efforts of the historical leaders of both nations, active cooperation was carried out in all fields of politics, economy and culture, and joint action was taken on the international scene.

Ties of Korean-Cuban friendship, proven and consolidated in the fight for the socialist cause, are developed just like strategic ones according to the needs imposed by present times, the article continued.

Rodong Sinmun added that the two parties and countries invariably hold the banner of anti-imperialist independence and socialism by supporting and collaborating closely even in the context of the complicated international situation.

In this regard, it indicated that friendship and unity will be further consolidated, and promised that the DPRK will send firm support and solidarity to the just struggle of the Party and people of Cuba.

The Korean people will always be by the side of the Cuban nation in any circumstances, the newspaper’s editorial concluded.